Theatre Review: ‘Anything Goes’ at The Little Theatre of Alexandria 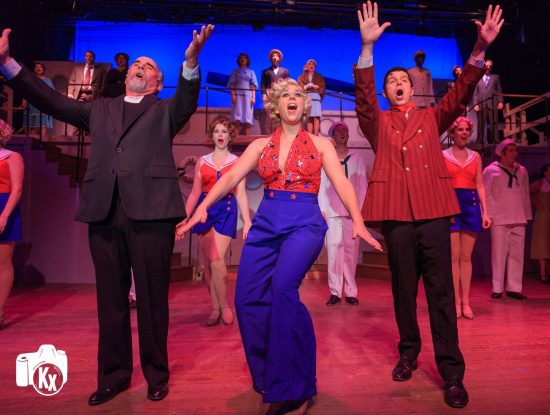 The cast of ‘Anything Goes’ at The Little Theatre of Alexandria. Photo courtesy of LTA.

With the glowing lights of the National Harbor growing more intense with recent developments, the ability to daydream about luxury yachts and passing ships has become a bit easier.  Luckily for theatregoers a ticket to the playhouse is cheaper than a transatlantic cruise and Cole Porter’s “Anything Goes” is scheduled to be docked at The Little Theatre of Alexandria until February 4th.

The music and singing prevailed as the shining element of this production.

Originally opening on Broadway in 1934, “Anything Goes” invites the audience aboard the U.S.S. American for a nautical journey from New York to London.  Aboard the ship is nightclub singer Reno Sweeney (originated by Ethel Merman),  Moonface Martin (Public Enemy #13),  and the makings of a love triangle between Billy Crocker, heiress Hope Harcourt, and her fiancé Lord Evelyn Oakleigh.  The lead role of Reno was later revived by Patti LuPone (1987) and Sutton Foster (2011) but the true star of the show is Porter’s infamous lyrics of alliteration.

The Little Theatre of Alexandria had a packed theatre for the opening performances this weekend and it was obvious by those in attendance that we were all in store for something exciting.  Under the direction of Stefan Sittig the cast of “Anything Goes” took us back in time to a period when transcontinental cruising was a luxury and ones socioeconomic status meant everything.  The LTA had quite a cast and set for such a small stage but they were able to use every square inch of it, creating a two-story ship suitable for singing and dancing.  Although the stark white ship lacked pigment and definition, lighting designers, Ken and Patti Crowley were able to add color and motion bringing life to a pale backdrop.

Mayhem, misdirection, and meddling were afoot as actors Marshall Cesena (Billy Crocker) and James Maxted (Evelyn Oakleigh) vied for the heart of Hope Harcourt, played by Tori Garcia.  Cesena and Maxted were able to keep the flow and the dynamics of the show sailing along with the help of veteran actor Ken Kemp (Moonface Martin) who delighted us with his rendition of “Be Like the Bluebird.” It was honestly a moment worth… retweeting!

The music and singing prevailed as the shining element of this production.  Francine Krasowska (Music Director) did an excellent job bringing Porter’s music to life and keeping the tempos upbeat, which helped to enhance the numerous jazz squares and time steps in the choreography.  Her direction really stood out during the a cappella moment of “Public Enemy Number One.”

“Anything Goes” is playing now at The Little Theatre of Alexandria through February 4, 2017.   For more information, visit online.