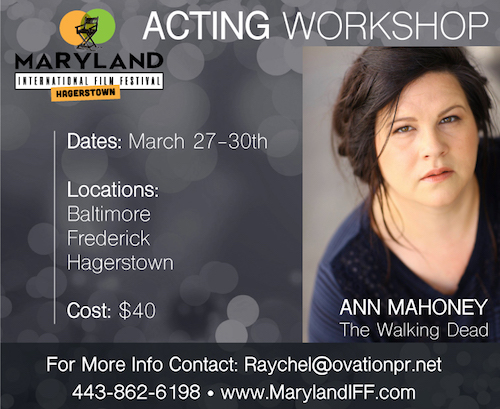 Now you have the chance to get some help, advice and coaching from the actress described by critics as “Raw and Real”. It was Ann Mahoney’s ability to bring a character to life that drew the attention of Scott Gimple and AMC when they cast her as Olivia in the hit series “The Walking Dead.”

On the success of her role in “The Walking Dead,” there is no downtime for actress Ann Mahoney as she hits the big screen next month in “ Same Kind of Different as Me” starring alongside Renée Zellweger and Jon Voight.

Mahoney also premieres next month in “Sun Records.” She plays the mother of Elvis, Gladys Presley in the new CMT series.

Ann loves to teach and pass on her tricks of the trade; now she is offering an extensive acting workshop.

“If you like someone’s work, and you have the opportunity to take a class from them, it’s a special opportunity. I have a list of about 25 actors I would LOVE to take a class from!! I always had teachers tell me I needed to be tenacious, but it means something different when you start trying to make your way in the professional acting world.”

Workshops will be held across the country starting in Maryland and Washington DC. She also hopes to offer classes in Rhode Island, Chicago, and California, later this year.

“It gives me a sense of giving back to the teachers in my life who gave me so much. It reinforces, and sometimes calls into question, my personal training methods. I find it reminds me to keep doing my work, never just to wing it.”

Classes are between 2-3 hours and cost $40, email Raychel@ovationpr.net for more information on locations and to book your spot!

This is a self-post news article.