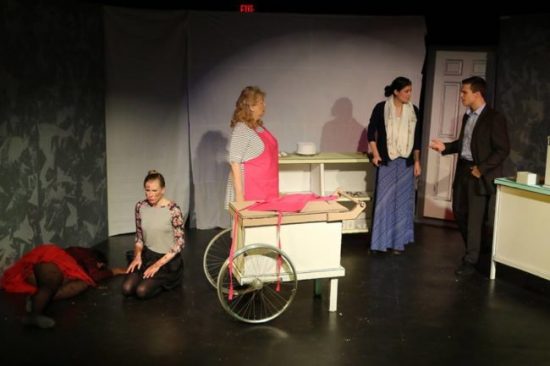 It’s a clear case of Metathesiophobia-the fear of change. As America makes a stand for change in the upcoming week welcoming a new president, it’s apparent off stage and in real life that not everyone copes well with change.

The Strand Theater heads into its 9th season and is only one of two theaters in Maryland who perform shows written only by female playwrights.

A great show, capturing perfectly the fear of something we will all face, change.

“Exit Pluto” played out at The Strand Theater on Sunday, January 15th. Upbeat music and smiling faces are abundant as you enter The Strand. The theater occupies a beautiful space in a former bank building in the historic Hamilton – Lauraville neighborhood of Baltimore.

Written by Amy Bernstein and directed by Alice Stanley “Exit Pluto” looks at the life of a baker who fears even the slightest of change in her world. Sadly her bakery, or her fortress as she refers to it, is not the peaceful sanctuary she thinks. Her customers are less than honest, and after losing a loyal member of staff, she puts her faith in a new apprentice. A great show, capturing perfectly the fear of something we will all face, change.

Set and props designed by Kate – Smith Morse are simple and effective. Clean, simple and well lit. The set aims to make an easy transition from the bakery to being part of a high-rise sprawl. My advice is to eat before you attend this play as there is temptation all around in the form of glorious cakes and pies. I almost envy the cast members who may be watching their waist line after this run of “Exit Pluto.”

Janise Whelan struts out to give a strong performance as the ruthless, strict but at times incredibly insecure Betty from the start. Her performance is strong throughout and she develops well into the character who fears change. Lighting by Lana Riggins helps to determine the moments when Betty’s character changes and becomes fearful of having to leave her fortress and go into the world outside. Whelan shows no remorse for an employee who died, only sadness for the perfect fluffy fondant she created. This change is rocking her world.

Barbara Madison Hauck plays Lulu, excuse the pun, the flaky apprentice who will do anything to win Betty’s favor and work by her side in what she deems as her lifelong ambition. Madison Hauck plays the catty, well-meaning blonde exceptionally well and never shows a sense of disdain towards Betty despite her treatment. Even when she proves herself as a master baker with her special secret recipe, fit for a queen, literally – but I won’t spoil the surprise. As the title would suggest, however, there are significant changes on the way for Lulu. After all, Pluto was once a planet.

For all the astronomers reading this technically Pluto didn’t change, but the definition of what a planet is changed.

Jessica Kim plays Nouschin, the reason that phrase “the customer is always right,” yes she is that customer. Never happy, rude and early on in the play we discover she is also dishonest. Kim plays the hard-faced Nouchin very well showing no guilt for the years of service given to her by Betty. Coping with her cane and her ailments she moves around the stage well and finally shows Betty that even those you think are the truest of friends can turn bad.

Betty’s fear of change is highlighted with the arrival of Hector played by Flynn Harne. Betty insists that Hector takes his medicine ( a delightful cake that seems to cure him), she also wants him to be six years old again and smile at her lovingly and tell her he loves her. Flynn does an excellent job balancing this character who at first plays along with Betty. Sadly, he is the change she wants to run away from the most and she doesn’t even know it. Harne plays the developer from hell who just wants the bakery that sits right in the middle of what he wants to be his high-rise heaven.

No spoiler alert here but it seems nothing in life is as it seems. However, I must mention a noteworthy performance from Blossom played by Bethany Mayo. A sexy temptress who will not take no for an answer, Mayo did a great job playing an unexpected character. I guess you will just have to see for yourself.

Amy Bernstein admits that “Exit Pluto” was inspired by news events when a baker refused to make a cake for a non – heterosexual pair of lovers. She asked herself why? What are they afraid of… could it be the fear of change?

“Exit Pluto” runs through January 29th for more information on the show and to buy tickets you can head to the theater’s website here. Meanwhile, I will be sure to track down Mary Willard and Home-Made Sweet Shop to try some of those delicious looking cakes!