Theatre Review: ‘The Women’ at The Spotlighters Theatre 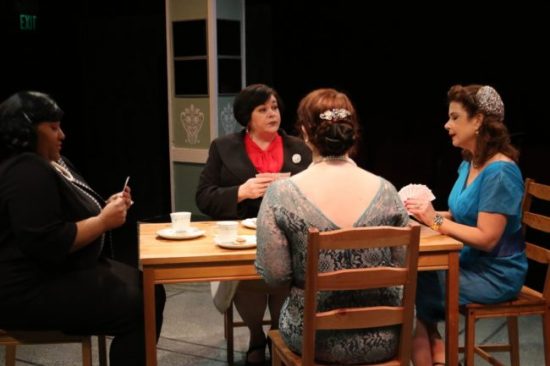 A dynamic all-female cast hit the stage on Friday, March 3rd at the Spotlighters Theatre in Charm City to look back at life as a woman in the 1930s.

Based in Manhattan, these women are the original Manhattan housewives.

So how much has changed since the 1930s? Well, I can tell you despite being an all female cast the topic of conversation is always men!

The Spotlighters Theatre brings this poignant and witty performance described as a comedy of errors to the theater now celebrating its 56th season. Directed by Fuzz Roark the use of space is dynamic and pacing. Roark captures both the gravity and the hilarity of this play.

It’s thought provoking, yet funny, relevant and there is a good old cat fight! Meow!

The opening scene shows four prominent society women playing cards and discussing the man or lack of males in their lives. The seating at the theater is arranged around the entire stage, so there are different angles to view the performers. While this and the narrow walkways to the stage make the scenery changes challenging, they are done with ease as the lights go down. The set designer Alan Zemla was ambitious using a full-size tub in the show, it worked and was a fabulous addition, kudos to the crew who seamlessly brought the scenery on and off stage.

Lighting and sound were on point throughout the show, and the costumes were outstanding. It was a production in which every element added to the storyline and as a member of the audience, I was a part of that charming story.

I can’t imagine how audiences reacted to this when it opened on Broadway back in 1936 starring a woman named Doris Day in a minor role. So how different was marriage, divorce, and childbirth in the 1930s, surprisingly it seems little has changed concerning the problems women face. The women complained of wages, and how men were paid more back then, some things haven’t changed for sure.

17 cast members all female but don’t be fooled this is just as much a play about men as it is about women. Michele Guyton is eloquent and elegant in her role as Mary Haines the character at the center of the story. The upper-class society women who never wants to air her family business in public, sadly she is given little choice by her group of gossipy elitist girlfriends.

Andrea Bush plays an author (with two devoted readers) and spinster Nancy Blake, a strong character who tries to stay out of everyone’s business. Nina Krauss is adorable as Peggy day a sweet, caring young women. Tynesha Haden, the mother of all mothers- pregnant with her fourth child, plays the privileged and clueless Edith Potter clueless.

The ladies are somewhat under the spell of the gang ringleader Melanie Bishop who plays Sylvia Fowler the original mean, and gossip girl played marvelously I will add.

Christina Holmes, Mary’s Irish maid did a great job at holding down the accent throughout. Her scene with the cook played by Amy Haynes was hilarious as she played out an argument between Mr. and Mrs. Haines all with an Irish twang.

10-year old Molly Ross plays Little Mary daughter of the Haines family.  A very wordy script for such a young player and she coped exceptionally well.

Other noteworthy characters pop up throughout the plot which I am trying not to give away. Kellie Podsednik plays the very sexy Crystal Allen, the working class girl who captures the eye of a wealthy and married admirer. Suzanne Young plays columnist and star-maker Countess de Lave, a serial bride who lures men with her checkbook and it works, for a short while. The aging countess is witty with her quippy one-liners. Chaela Phillips plays Miriam Aarons with feisty attack added into the play at poignant moments.

Ilene Chalmers puts on a robust and expected front as Mrs. Morehead, Mary’s mother. A lesson that sometimes mothers don’t give the best advice.

The women head briefly to Reno for a break after dealing with their ‘men issues’ they joke citing they are being ‘renovated’ before heading back to New York.

“Nobody ever misses a clever woman,” just one of the great lines from this play the thought provoking script that stands the test of time to this day. The glamorous ladies, the search for male approval and the realization that not all women can be trusted, some things never change.