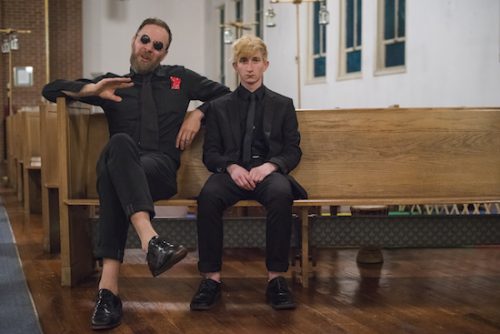 Celebrating its 10th season Single Carrot theatre once again shows Charm city how diverse and creative it can be. What could be more enjoyable and entertaining than a pleasant stroll around the Remington area of the city experiencing several short plays in various locations? Despite not being the perfect April night weather wise, the rain and flashes of lightning didn’t deter the audience embarking on what is an extremely enjoyable journey on Thursday night.

The walking tour starts at the theatre on N Howard and 26th and meanders around the historic area showcasing playwrights and returning and current actors from the single carrot theatre from the past 10 seasons. While I may have overlooked the note that suggests wearing comfortable shoes, there are just a few blocks between each play and plenty of time to rest so it’s not a hike.

Kicking off the fun is “36 Questions” written by Adam Szymkowicz. The complicated matter of finding love in a modern world using the theory of the 36 questions based on ‘that lead to love’ published several years ago in the New York Times. Alix Fenhagen and Matt Shea play the couple, Emily, and Sanders looking for love sitting opposite each other at the Charmingtons coffee shop on N Howard awkwardly convincing the audience that the questions theory just may work.

Next up is Bruce/Brenda/David written by J Buck Jabily and Nathan Fulton. The cast Aldo Pantoja, Nathan Fulton and Meg Jabily take on the story of the consequences of fighting nature over nature the debate of the causes of gender neurality. Set outside the Single Carrot Theatre the actors are sitting in and on a car in a parking space outside the theatre much to the confusion of passersby. However there is no confusion with the powerful message of this piece.

Just a few short steps away at the Young Audiences building we headed to see “Tense White People Have Dinner” it’s that awkward visit with family and loved ones we have all faced at some point in our lives. Written by Jen Silverman this play has an usual and entertaining twist. Without giving away too much I will say that sometimes even though we have two eyes that see perfectly we don’t really see what is around us.

“The Ninth Planet” is the next stop after a few blocks of walking guided by two delightful and insightful tour guides. On the note of tour guides mine were Rich Espey, and Kava Haerian. Don’t be surprised if your guide gets caught up in the moment of various plays laying out his or her personal feelings and emotions, which all adds to this very unusual staging and production. Ben Hoover is the writing behind the tour guide text. “The Ninth Planet” is written by Olivia Dufault and if I were permitted as a reviewer to have a favorite play within “A Short Reunion” this was it— ooh wait! apparently, I am allowed.

“The Ninth Planet” is the story of a young woman struggling with life and school under the influence of a father who is on another planet where ever that may be. Alix Fenhagen does a great job as a teacher trying to get some clarity on why her student is failing. Jessica Moose Garrett flip flops brilliantly between the unruly teenager and the woman she grows up to be, or at least thinks she does and Elliott Rauh complete with astronaut type sound effects is brilliantly entertaining as the dad.

The Church of the Guardian Angel provided the location for several of the plays including “Grand Mal” written by Shawn Reddy. Complete with rockstar shades Paul Diem demonstrated his versatility as an actor playing the unnamed man and Ben Kleymeyer shows great restraint and focus playing the kid an unarmed character. Have you ever thought about how it would feel to attend your own funeral?

“Live Through This” written by Caridad Svich is both something you may want to remember and want to forget. The set, a high school prom set in a gymnasium using various objects and illustrative art to remind you of your prom. So much decadence and fear using solely a voice over to evoke thoughts, Nathan Cooper is the voice that leads the journey.

“Itch so Bad” is tasteless and hilarious, I loved it! The portrayal of two gay men struggling with promiscuity and the unfortunate consequences that can arise from it. Written by Joshua Conkel starring Elliott Ruth and Dustin C.T. Morris, be prepared to laugh! Scabies that sing and play instruments who knew! All brilliantly led by Britt Olsen-Ecker and her team of faithful Scabies. They include Brian Gilbert, Paul Diem, Aldo Pantoja, Nathan Fulton and Brendan Ragan.

Heading just a few blocks away from the itch we landed in a fabulous location that looked like a perfectly decorated warehouse, wait it was a warehouse/workshop. “One More Time” written by Eric Coble looks at the relationship between Sam and Casey played by Genevieve De Mahy and Alix Fenhagen. I have seen these ladies in various productions at the theater, and they never fail to impress me. A perfect contrast to the mayhem of the previous play and one from which you can draw your own conclusions.

What better a way to end this extremely entertaining night than with a group therapy session, who doesn’t love a good group therapy session? “The Therapist” written by Charles Mee concluded my evening of unusual theatre starring Paul Diem as the therapist and the ensemble. Another engaging and great piece of writing, as the cast, crew and audience skipped back to North Howard street, it seems to be a group therapy session was exactly what the doctor ordered.

Kudos to all the stage managers and production and sound work that went into all the venues. This series of plays ran smoothly like a well-oiled machine.

“A Short Reunion” runs through April 30th at the Single Carrot Theatre, for information on tickets click here.