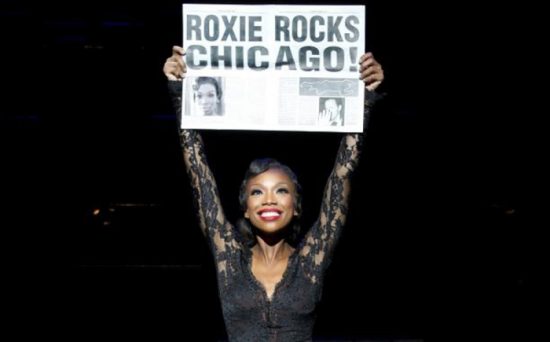 “Chicago” was on fire–not literally when Brandy Norwood hit the stage on Thursday night as the show opened at The Kennedy Opera House.

A story of murder, corruption, exploitation and adultery all those things we hold near and dear to our hearts, and that’s just the opening scene.

…Brandy takes on the role of Roxie Hart giving the murderess a more modern feel…musical gem.

Grammy Award winner Brandy Norwood hit the stage as part of a limited run in “Chicago” at the center. Welcomed by a packed house the pop diva showed the audience that she has what it takes to cut it on the stage.

Brandy hit the pop scene in the mid-1990s and went quadruple platinum with her debut album at 16. Now in her late 30’s the pop diva Brandy takes on the role of Roxie Hart giving the murderess a more modern feel. Norwood plays the murderer, adulterer and wannabe Vaudeville performer with ease and optimism. Despite being behind bars, Hart still dreams of hitting the big time and like her murderous friend Velma Kelly she is not afraid to use her time in jail to ramp up her popularity.

How do you make a production of “Chicago” different? The show has been around for many years, and the Bob Fosse style of music and dance is recognizable worldwide. This version of the musical brings a new edge to the popular musical allowing the characters to play up the humor, interacting more with the audience and not sticking so rigidly to the typical musical theatre script. Brandy stayed true to her music style and background in pop and gospel giving a very different feel to her big show stoppers “Funny Honey” and “Roxie.”

From the lone chair that sits adorned with a hat in the spotlight as the orchestra strikes up the eleven-piece orchestra on stage are an integral part of the show with Music Director Rob Bowman narrating key moments throughout. Creating the correct ambience in this show is crucial. The lighting never faltered, it was perfect.

Hitting the stage and setting the high standard with “All That Jazz” is Terra C.MacLEOD who plays Velma Kelly. Hailing from the Broadway Company from the moment MacLEOD hit the stage it was clear that this wasn’t just another touring show. Macleod plays the double murderer with the perfect balance of selfish conviction and class. Singing and dancing her way through “Cell Block Tango” “My Own Best Friend” “When Velma Takes the Stand” and much more.

“If you’re good to Mama, mama’s good to you” and Roz Ryan is more than good as she plays Matron “Mama” Norton. She nailed this character with her big voice and personality. Ryan adds comedic moments with her audience interactions showcasing a real performer.

He’s dashing and debonair and let’s be honest who can resist a handsome man in a tuxedo? As the chorus chants, “We want Billy” Brent Barrett steps up as the jailhouse lawyer out to make a buck and a name for himself. Barrett is as smooth as silk is his performance throughout; playing Flynn on Broadway, he has perfected this character of greed, compassion (at times) and a handsome manipulator.

Paul Vogt plays Amos Hart, a loveable but somewhat invisible character who keeps the plot moving between his adulterer wife, Roxie. Vogt brought the house down with this rendition of “Mister Cellophane.” Who doesn’t love the underdog? Especially if he can sing!

C. Newcomer plays Mary Sunshine a reporter who holds a very special place in her or should I say his heart for Billy Flynn. Newcomer’s performance is outstanding and not to give too much away; this female character is not all she seems to be.

The cellblock sisters were outstanding, great casting in these roles and adding in the male performers who took on various cameo parts the ensemble were vocally excellent.

The Kennedy Opera House is an opulent setting inside The Kennedy Center and is the perfect location to host this musical gem.