Theatre Review: ‘The Sound of Music’ at The Kennedy Center’s Eisenhower Theater 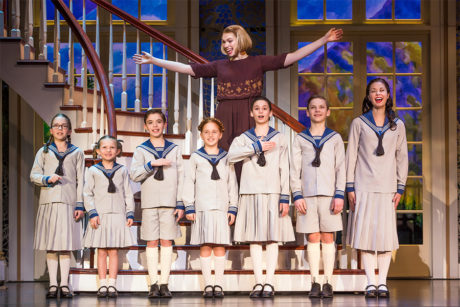 It wasn’t quite on ‘The Hill, ’ but very close to it as The Kennedy Center comes alive through July 15th with Rodgers and Hammerstein’s “The Sound of Music.”

This is without question one of my all time favorite stage productions and movies. It makes me smile and brings back happy childhood memories. It’s always tough to watch a show you have seen a million times (although that may be an exaggeration), but The Kennedy Center never fails to bring shows to the stage that have a new edge to them.

An amazing cast tackles this classic musical to bring an enchanting and enjoyable performance loaded with enthusiasm and charm.

Based on a real-life story of the Von Trapp family singers, Maria, a postulant at an Austrian Abbey is sent to act as the governess in the home of a widowed naval captain who has seven children. Maria brings love, life and the sound of music back into their lives, fending off a wannabe potential wife for Captain Von Trapp along the way with her pureness and her big heart. She may have failed as a nun, but she thrives as a governess despite Austria being on the brink of coming under the control of Germany.

….enchanting and enjoyable performance loaded with enthusiasm and charm….

There is no build up to this show, from the start boom! You are hit with the gloriously angelic voices of the nuns of the Nonnberg Abbey led by Melody Betts as The Mother Abbess, one word wow! The nuns are vocally superb, and Betts is incredible! What a voice!

There isn’t a weak cast member in this show.  It’s well cast, and every voice and character brings the show alive with each line of deliberately delivered dialogue and song.

Charlotte Maltby as Maria brings a playful innocence and elegance to the role. Her voice is breathtaking, and her love for her role with the Von Trapp children is evident in abundance. She really looks like she is having fun!

Nicholas Rodriguez plays Captain Georg Von Trapp a pure Austrian who stands up for his beliefs. His character and stage presence stay strong throughout the show, enchanting the audience with his velvety tones.

Other notable performances were Merwin Foard as Max Detweiler a fun, slightly annoying and self-loving character who adds balance to the purity of the show’s characters. Also Teri Hansen, who plays Elsa Schrader. Hansen has an incredibly strong presence and voice playing the complete opposite character to Maria, as she fails in her attempts to win the heart of  Captain Von Trapp.

Austin Colby plays Rolf Gruber, the young man who Liesl experiences her first kiss and butterflies with. Colby and Silvester’s voices blend beautifully and while their love has no chance to blossom, Colby under Nazi control shows his love later in the show.

The set is designed by Douglas W. Schmidt glides seamlessly.  This is the first aspect of the show that strikes you as being top class and beyond that it doesn’t disappoint. From Captain Von Trapp’s mansion to the Abbey and on to the mountains that set the scene for this classic show. The opulence of the Von Trapp mansion and the sheer detail of the stain glass windows in the abbey are very impressive. The Lighting designed by Natasha Katz adds to the extravagance of the estate and the purity of the abbey.

There are lots of moving parts during the scenes with the children.  While the choreography by Danny Mefford was basic it was well timed and perfectly executed. The costumes designed by Jane Greenwood were very in keeping with the era and added to the authenticity of the show.

Running Time: Two hours and 45 minutes with a 20-minute intermission.