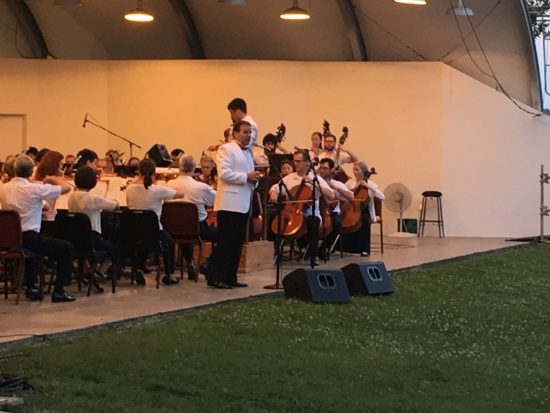 The Baltimore Symphony Orchestra (BSO) took to the stage at the Hubert L Snyder Concert Shell at Oregon Ridge Park in Cockeysville on July 3rd for the “Star Spangled Spectacular;” and Spectacular it was.

July 4th is my favorite American holiday; weird as I am British. I love all the pomp and ceremony but most of all the sense of family, togetherness, communities, all different colors and creeds coming together, just some of the things that make America so great.

Thousands of people took to lawn chairs and blankets as the Symphony struck up under the direction of Associate Conductor Nicholas Hersh. Hersh joined the orchestra in 2014 and is vibrant and enthusiastic in his conducting. I love watching him work as he engaged throughout the program with the thousands gathered.

Hersh soon welcomed Tenor Richard Troxell to the stage to sing the “The Star- Spangled Banner.” Troxell is amazing. The renowned tenor went on to wow the crowds with songs from “La Traviata,” “Beauty and the Beast,” and a medley of America’s favorites titled “Sing Out America.”

A patriotic celebration of America, bringing together exceptional musical talent, lawn chairs and glow sticks, you could feel the love in the air.

Soprano Melissa Wimbish was also featured throughout the program. Wimbish hits all the right notes and is a pleasure to hear and watch bringing personality to her singing. You could almost hear the grass growing when she sang ” How Far I’ll Go” from Disney’s “Moana.”

There was music for everyone at this show, from Tchaikovsky’s “1812 Overture” and Sousa’s, “The Stars and Stripes Forever.” One of my favorite moments was Troxell grabbing the hand of Wimbish and dancing while performing “Libiamo ne’lieti Calici” from “La Traviata.”

Musical tributes were made to each branch of the military and Ellen Pendleton Troyer, one of the symphony’s violinist was featured in “Sweet Georgia Brown.” The program was America through and through.

I was lucky enough to grab a few minutes with Production Manager Jeannette Matte who despite wearing many hats took the time to chat with me.

“We have made some changes this year to the event. We listened to the feedback from last year and added a few more vendors, bathrooms and bar areas,” said Matte.

Matte says tickets were capped around 7,500 for the event to make it comfortable for everyone attending. There were some tickets for sale at the gate, but this event was sold out. As my first year attending it was easy to see why!

Matte adds, “This year we used the Fairgrounds in Timonium as a pickup shuttle location. This is the first year we have used one site for the shuttle service and it seems to be working well. The Fairgrounds can hold thousands of cars, and the shuttles run continuously just in case people have to leave before the show ends.”

Associate conductor Hersh offered up his role in conducting the symphony with a very clever fundraising tool for the BSO. The audience were encouraged to text #52000 and donated $10 and instantly get entered into added a raffle to get to chance to conduct the orchestra. Brilliant marketing!

An outstanding firework lasting about 15 minutes followed the BSO program ending a fantastic community event and a chance to see the symphony in a very different setting.

Certain roads were closed off around the event at 9:30 as they were in the drop zone of the fireworks. From the staff to the musical program, the ease of parking, the safety of the event and the presence of local law enforcement who while working were having a great time at this event. I can’t wait for next year!

Running Time: 2 hours with a 20 minute intermission. (including show and fireworks)

For more information on the Baltimore Symphony Orchestra and it’s upcoming event you can check out the website.