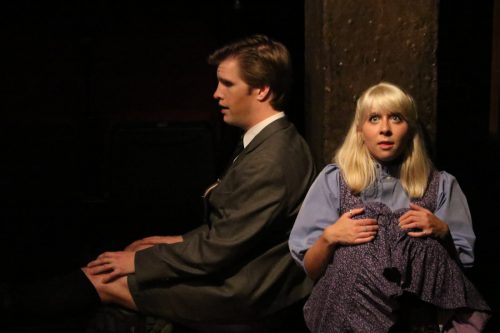 Spotlighters Theatre in downtown Baltimore is the perfect intimate setting for this musical- with its round stage and cozy atmosphere.

Set in Germany in the 1980’s it’s a deep and at times dark story but this cast will keep you interested, especially if you are a rock fan. The musical is influenced by rock and pop music throughout.

“Spring Awakening” looks at how teenagers discover sexuality; the good the bad and the ugly and the perils of not educating young minds about their sexuality and the risk that it brings.

The group of teenagers centered around Melchior played by Sean Dynan and Wendle played by Allison Comotto. Her character balances the growth of her sexuality inside an innocent teenage body. Comotto is a joy to listen to with a strong voice that misses no beats. Dynan holds his own in the divide that should not be so large between boy and man. His voice adapts well to the emotions of the storyline. A notable performance in his song “Left behind.” The two teens work well together, and their characters develop through the storyline.

Comotto is a joy to listen to with a strong voice that misses no beats.

Martha (Alyssa Bell), Thea (Ana Johns), Anna (Rachel Verhaaren) and llse (Ellen Manuel) each add flair and personality as part of the cast. Manuel gets her moment to shine further as she grabbed her guitar to play for the audience in her true hippie style. My favorite group number was “Mama Who Bore Me” the girls brought so much energy to this song– it is contagious.

The male ensemble is the perfect complement oozing sex from the moment they hit the stage. Otto (Brendan Hale), Hanschen (Aaron Hancock), Ernst (Chris Weaver) and George (John Endres) are all unique characters. Something that is not always easy to achieve. Their opening number “The B**ch of Living” solidifies how their character will develop so be alert!

The teenagers try to find their way through the rocky path that is teenage life. It’s a powerful and moving story of discovery, youth, and rebellion.

As if being a teenager isn’t complicated enough Moritz Stiefel played by Jim Baxter adds another layer of complication to his character. Insecure and anxious yet rebellious. He creates so much tension in himself he develops a twitch! I was left wondering if the character was supposed to symbolize a learning disability in his performance – it was that intense. Baxter possesses a voice that is made to sing rock!

All of the adult female characters are played by Tony Korol-Evans and the males by Marc Korol-Evans. While the roles are not huge, Tony shows her acting skills and her ability to flip flop when she plays Wendla’s mother.

The music tells this story, and therefore the set is very simple. There are four intermingled trees painted on the stage to create the illusion of a dense forest and maybe symbolize the complexity of trying to figure out a path through teenage life.

Directed by Jillian Bauersfeld with Musical Direction by Michael W. Tan every inch of space is used and every note sang with purpose. Choreography by Amie Morrow Bell is simple and sophisticated but also very complicated at times but well executed. The costumes of Amy Rawe Weimer are suitable for the period and well thought through. Lighting plays an important role in this musical setting the atmosphere through each musical number. Designed by Laurie Brandon and Terry Brandon the lighting was a success!

Advisory: There are adult themes in this musical.

“Spring Awakening” plays through July 30, 2017 at The Audrey Herman Spotlighters Theatre. For tickets call the box office at (410) 752-1225 or purchase them online.