Theatre Review: ‘I’ll Get You Back Again’ at Round House Theatre 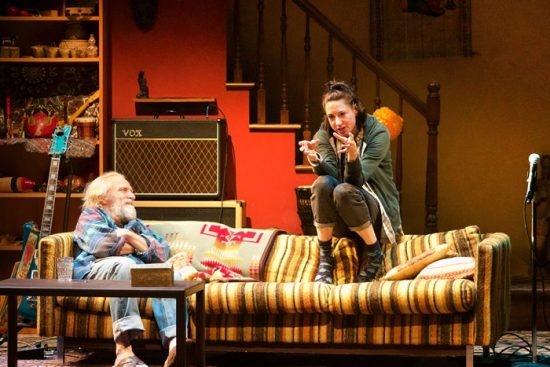 David Patrick Kelly (Carl) and Renata Friedman (Chloe) in ‘I’ll Get You Back Again’ at Round House Theatre. Photo by Kaley Etzkorn.

So when did the 60’s end for you?  When Jimi and Janis died?  When the Beatles broke up?  When Reagan got elected?  Or did it take the election of Donald J. Trump to the presidency, for reality to finally sink in?

Karma’s a b***h, man.  And so is the realization that without meaning to, a lot of what you did that seemed so cool back in the day has actually done some damage, both to you and to the people you love.  The resentment we felt for the messed-up world our parents gave us?  Gone; and in its place is the guilt that our kids lay on us for the way we have neglected them, the way we have forgotten to fix all the stuff that was broken.

If you’re not afraid to look in the mirror, “I’ll Get You Back Again” is for you…one of the most compelling shows on the scene for this October.

And yet, even as we survey the wreckage of our lives, the long parade of mistakes, there is room for healing and reconciliation.  It’s a rough road back to feeling at peace with yourself, but it’s doable.  And Sarah Gancher’s semi-autobiographical drama “I’ll Get You Back Again” offers redemption, even as it reminds you frequently the many things you need redemption for.

Director Rachel Chavkin, fresh off her Tony-Award nomination (a show with something about Tolstoy’s Pierre Bezukhov and comets, from what I’ve heard), has assembled a spectacular cast of performers who have rock chops in addition to major acting talent.  And we learn to our great joy that you can have a jam session in the middle of a show and it will still leave plenty of room for hilarious, poignant scenes that will follow you home and never let you go.

At the heart of the play is Carl – played here with touching but hip restraint by David Patrick Kelly – whose physical decline has inspired a plan to bring his old rock band, The Pisces, back together again for one more gig at a local festival.  Into his tastefully-cluttered Berkeley rowhouse (brilliantly conceived by Scenic Designer Carolyn Mraz) comes Chloe, his niece.  Her father Jimmy, Carl’s brother, played bass in the band and as part of the reunion, and in tribute to her father, Chloe has agreed to take her dad’s place.

As Chloe, an aspiring comedienne, Renata Friedman burns through the stage with a painful ferocity.  She opens the show with an edgy, profane, insult-laden stand-up routine of the kind we practically take for granted.  But as any old 60’s hand could tell you, her style of comedy owes a huge debt to pioneers like Lenny Bruce, who was among the first to confront audiences with unpleasant truths and use unpleasant language in the bargain.  Seeing the legacy of Bruce made so brutal and obscene gives her uncle Carl pause, but she’s determined to stick with it.

Into the house stumbles Coyote Dan, the band’s lead singer and one of those notorious womanizers from the rock era.  Remember when we thought that rock was all about getting laid?  That twisted male ideal gets a thorough once-over here, as Gancher makes crystal clear that all that bacchanalian BS has actually done a lot of damage, even if Dan is oblivious to it.  His gusto for sex with anything in skirts includes Chloe’s hippie mom Tulip (the charmingly dizzy Helen Hedman); but when Dan and Helen suddenly decide to go for it chaos ensues.  Their attempt to relive their wild youth is outrageously funny, but Gancher shows the consequences as well, throwing the mirror at an audience that – let’s face it – once thought that kind of random coupling was perfectly normal.

Given the chaos and chaotic emotions among the rest of the band the only voice of reason is possessed by Melvin—the ever-powerful Michael Anthony Williams, in yet another star turn.  Melvin, in addition to being an amazing jazz drummer (Williams gives us a brilliant display of that too), is a lecturer at Mills College nearby and an indomitable herbalist, convinced that his bizarre organic juices can cure Carl of what ails him.  Melvin treats us to one of those intense, metaphorical lectures about musical ancestors and ghosts, which clearly means everything to him even as it goes over the heads of the undergrads in his classroom.

This being a play about the 60’s generation, the concept of flash-backs so familiar to theatre audiences is given a special, psychedelic twist as Carl spaces out and the house becomes a projection screen for bizarre sequences of colors, shapes, and – in one especially memorable sequence—images of the Three Stooges.  Jared Mezzocchi has clearly made a careful study of all the rock era’s most memorable visual symbols, and given everything from the walls to Indian rugs a vibrancy that will blow your mind.

The Stooges, thanks to 50’s and 60’s re-runs on TV, were a staple of many a boy’s childhood (I know that was the case for me) and it turns out that they were revered to this side idolatry and beyond by Carl and his long-dead brother, Jimmy.  Carl and Jimmy had once planned a grand rock opera based on a typically LSD-addled concept of the Stooges as mystical Buddhist seers (trust me, it makes a kind of twisted sense).  Carl, seeking a deeper connection with his brother’s child, tries to convince Chloe to help him revive this strange concept, dragging out the 50-year-old, reel-to-reel tapes and battered notebooks.  Nothing is more sobering than the realization that a project which meant the world to you as a young man can look bizarre and pointless to today’s youth.

Like many plays these days, “I’ll Get You Back Again” shows signs of having been workshopped and revised to a fare-thee-well.  The dialogue is at times desultory, but the core of the production and the direction of the plot is solid.  The emotional impact of seeing your youth portrayed honestly, warts and all, makes it one of the most compelling shows on the scene for this October.

Robin Williams once famously said that if you remembered the 60’s you weren’t really there.  But the kids of those 60’s folk certainly do remember—sometimes with compassion, but often with frustration–all of their parent’s strange doings.  If you’re not afraid to look in the mirror, “I’ll Get You Back Again” is for you.  Even if the 60’s came and went before you came onto the scene, it’s a fascinating microcosm of America’s previous century and its discontent.