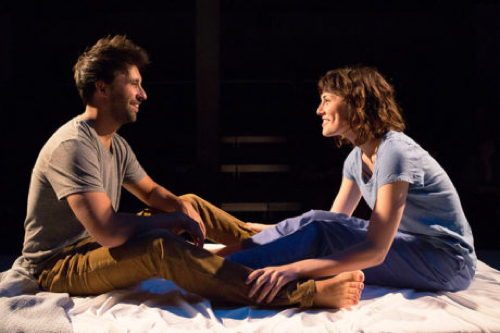 Recently, I was watching a movie from a franchise that deals heavily with superheroes, and one scene, in particular, gave me pause. In this scene, a character triumphantly throws a bag of prescription medication in the garbage.  Signaling to the people on the other side of the screen that people in a world where men fly through time and space in spandex, often after experiencing traumatic childhoods and abusive relationships, self-medication is reduced to a punchline.

…this play is so important and a must-see!

“The Effect” by Lucy Prebble, whose work is as diverse as the epic corporate play “ENRON” and the British drama “Secret Diary of a Call Girl”, deals with this stigma around medication in a direct way that is wonderfully refreshing.

The play, directed by David Muse, revolves around a clinical trial, where two “normal” people have volunteered to test a new anti-depressant. But when they start feeling the effects of the drug: heightened pulse, increased dopamine, sweatiness, they begin to wonder –  is it the drug or love that they’re feeling?

Katie Kleiger makes her Studio Theatre debut as Connie Hall, a young twenty-something psychology student who goes to the clinical trial to get away from her reality.  TV and voice actor Rafi Silver plays the happy-go-lucky Tristan Frey. The two fall in love, but have to figure out whether it is as a result of the medication or in spite of it. Kleiger and Silver’s chemistry is palpable.

Dr. Lorna James is masterfully played by Oregon Shakespeare Festival’s Gina Daniels, who originated the role of Coretta in Broadway’s “All the Way”. As a capable therapist, she is clinically removed from her patients, but the experiment quickly dredges up her own experiences with mental illness. Eric Hissom plays Dr. Toby Sealey, Dr. James’ superior and former lover, and excels in his speech detailing his relationship with his father.

The aquarium-like set, designed by Luciana Stecconi, requires the audience to be split into two groups, as if in an experiment. Together with Lighting Designer Jesse Belsky, whose work recently graced Studio’s productions of “Three Sisters” and “No Sisters” and Ford’s Theatre’s production of “Who’s Afraid of Virginia Woolf?”, the stage is transformed into a harsh impersonal hospital.  The fluorescent lighting of the hospital rooms is contrasted beautifully by the gorgeous nighttime scene.

Publicly, the conversation around mental illness and medication is problematic at best and life-threatening at worst. For quite a few people, medications are not only helpful, they are an absolute necessity, just as heart medication or insulin. It’s refreshing to see a play that does recognize that and doesn’t over-simplify the conversation. That’s why this play is so important and a must-see!

“The Effect” runs through October 29, 2017, at the Studio Theatre. For tickets and more information click here.