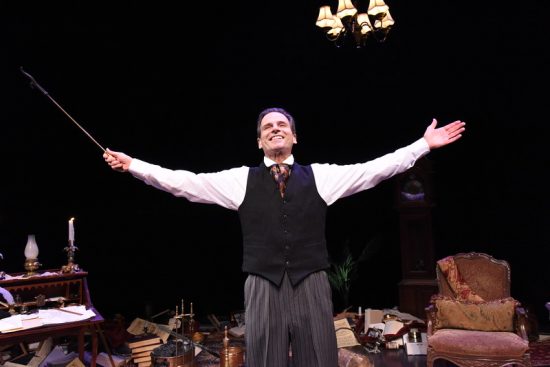 “A Christmas Carol” remains one of the most popular works ever written by Charles Dickens and the most popular ever penned in any language. It was written to be performed as “A Ghost Story of Christmas” by one person and Paul Morella accomplished that role with mesmerizing talent. With so many performances of this show across the tri- state area, this show stands out!

Charles Dickens wrote “A Christmas Carol” in six short weeks. It highlights both the greed, empathy, and poverty that surrounded  Dickens during the 1840’s.

Performed at the Mulitz-Gudelsy Theatre Lab, Morella is the usher guiding patrons to their seats, the narrator, adaptor, and sole performer taking on this incredible task. This show has been a part of the annual Christmas celebrations at Olney Theatre Center now entering its eighth year, and it’s easy to see why.

“ A Christmas Carol” is centered around the life of Ebenezer Scrooge, described as a miserly man who gradually transforms into a man who empathizes with those who are less fortunate and downtrodden. He sees his mean ways through the help of several ghosts of the past, present, and future and is given a rare chance in life to make good and be a better person. A challenge he takes on and succeeds in.

You are invited to Morella’s home, workplace and life in this intimate setting. To set the scene the stage is adorned with Victorian style décor, from the wood burning fireplace to the antique writing desk, a large clock, a coat stand that often appears to come alive, and newspapers scattered all around. Real candles that are lit and snubbed out to guide the plot seamlessly into day and night help to create the perfect setting. Morella is a master at changing his voice to represent the many characters this tale includes. He is simply mesmerizing. From Ebenezer Scrooge himself to Bob and Mrs. Cratchit and the ghost of Jacob Marley, Scrooge’s old business partner, Morella vocalizes them all uniquely making this complicated plot easy to comprehend. Morella doesn’t disappoint.

The lighting and sound are a critical element to the success of this one-man show and both were flawless in creating the scenes. Sonya Dowhaluk designed the lighting, while the sound was executed by Edward Moser.

“A Christmas Carol” was first published in 1843 but it stands the test of time and has been adapted for stage and screen over the years.

Perhaps many of us have forgotten the true meaning of Christmas, if so, then this show is a must see as it brings together a rollercoaster of emotions and to me the real meaning of not just Christmas, but of life. Remember there is a little bit of scrooge in all of us and in the words of Dickens with regards to this story, “May it haunt their homes– pleasantly.”

A Christmas Carol: A Ghost Story of Christmas runs through December 31, 2017, at the Olney Theatre Center in the Mulitz- Gudelsjy Theatre Lab. For tickets call the box office at (301) 924-3400 or purchase them online.