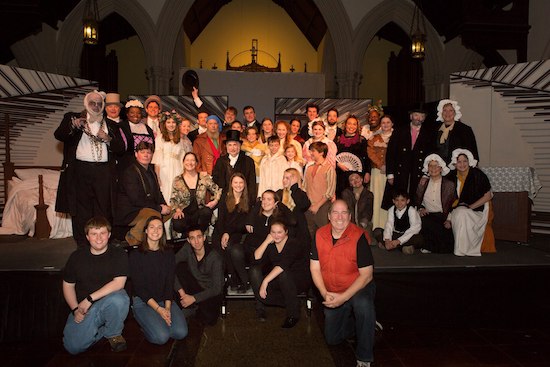 The cast and crew of “A Christmas Carol.” Photo provided by Memorial Players.

“A Christmas Carol” at Memorial Players glowed on Saturday night. This Charles Dickens classic is adapted to the stage by Romulus Linney and is directed by Darren McGregor and Rina Steinhauer. Memorial Players continue their tradition of free admission and bringing excellent theatre to the Baltimore area.

Linney’s adaption follows the basics of Dickens’ story and the other variations before it, with the ghost of Christmas past, present and future, but this production adds more characters, more stories of love and loss and much more to be grateful for.

A Memorial Players production is a guarantee fantastic show because all the players put their hearts, love and faith into each and every production.

The story begins with Ebenezer Scrooge as a disaffected, miserly man.  Christmas means nothing to him, and he is not afraid to tell people and his remaining family that anyone is a fool to spend time and money celebrating Christmas. When his old business partner, Jacob Marley (played by Thom Platt) long since dead and carrying heavy chains, visits him one Christmas Eve to warn Ebenezer of the afterlife waiting for him if he doesn’t change his ways, Ebenezer laughs off the sighting. When three ghosts show him important things in his life he missed in his past, present and what will come in the future, Ebenezer slowly realizes what is really important in life and that it is okay to love and to trust again.

David Forrer starts the show as Charles Dickens and enthusiastically introduces the audience to the story we are about to see.

Richard Peck plays Ebenezer Scrooge, and he does it well. The entire play revolves around Ebenezer, and Peck stands strong through the whirlwind of characters.Watching his arc is fascinating. Peck’s fear and joy are easily shown on his face.

Terry O’Hara plays a fine Bob Cratchit, and watching him with his on-stage and real life daughter (Nell O’Hara as Miranda) was truly moving. Greg Martin as Christmas Present is charming and friendly, and Petra McGregor is adorable as the ghost of Christmas Past. She does a great job convincing Ebenezer of what he was seeing was the past and something he needs to face to move forward.

The entire large cast works well together, and I could tell they all were having a marvelous time! The Charwoman, Undertaker’s Woman and Laundress, played by Kristine Smets, Kim Scaglione and Cordelia Grimm, respectively, stood out with their wonderful humor and joy. The other trio, Business Man 1, 2 and 3, played by John Lisch, Grey Maggiano (the Rector of Memorial Episcopal Church, where Memorial Players are housed) and Gavin Goren, respectively, also were filled with good cheer!

John Seeley is the set designer (who also plays a jaunty Mr. Fezziwig). His set works well, with revolving panels that show the inside of houses then revolves around for the outside scenes.

The costumes by Tita Rutledge and assistant Margaret Locklear-Peck help to set the show in Dickens’ London and define each traditional character. There are a few standout costumes like Martin’s ghost of Christmas Present robes and the delightful Carissa Hatfield’s dress as Mrs. Eliza Cratchit.  And of course, Daryl Beard did another great Lighting Design and Sound Engineer job for Memorial Players.

This is truly an ensemble cast and crew. A Memorial Players production is a guarantee fantastic show because all the players put their hearts, love and faith into each and every production.

Only one last weekend to catch this show, and it is playing December 8th, 9th and 10th.

Memorial Player’s “A Christmas Carol” is a must for everyone’s Christmas list!

For more information about Memorial Players, click here. Tickets are free and no ticket is needed before the performance.