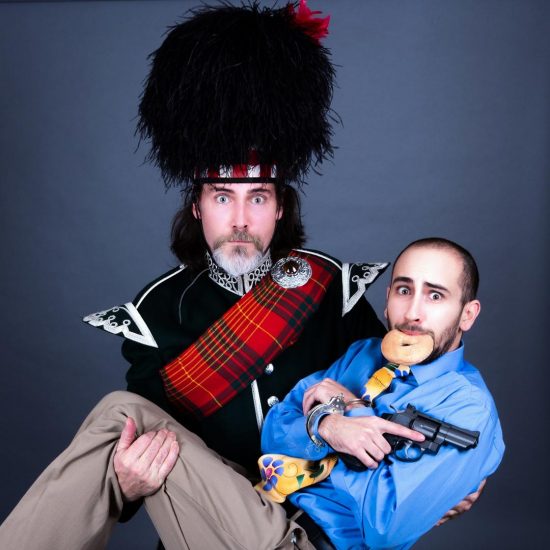 What a year it has been! Would you call the recent news cycle—oh, I don’t know, fake-arcial? We have been regularly been bombarded with salacious dossiers, hand sizes, libs threatening to move to Canada, but never making travel reservations, bombastic statements, little rockets and big rockets, shameless pandering and overacting, breathless text messages, strange bedfellows and multiple locations.

Has it been a farce? A farce, you say? Suppose we slyly mix in some theatrical bedroom romps, misunderstandings and hidden identities? Got it. A generous supply of PG naughtiness and clothes strewn everywhere? That works. Multiple entrances and exits to confound the viewership? Sure, why not. Multiple plotlines that intertwine and don’t get resolved until everything is satisfactorily wrapped up? Well, I’m not sure of that one. Reality is messier… This “Unnecessary Farce,” playing at the Keegan Theatre, may just be the necessary thing for our laugh-out-loud times.

If you are in the mood for something diverting, slightly raunchy, and delightfully silly, go see “Unnecessary Farce,”…

Yes, Farce. It’s not just for the government anymore, it’s a real thing. An ancient form of comedy, and one of the most popular in the theatrical lexicon originating in France and ably taken up by the brits. Early practitioners were classier– “The Importance of Being Earnest,” and even the rompier examples such as “No Sex, Please, We’re British” and the French “Boeing, Boeing.” There’s a certain attraction to putting your brain on hold and just dealing with guffaws, while actors are in various stage of dress and position, with mayhem exploding all around them.

A new entry into the genre, Paul Slade Smith’s “Unnecessary Farce,” continues in that tradition. Part traditional and part bedroom farce, with an appropriately absurd plot that you feel compelled to see through to the end despite the high frequency of groan-worthy jokes, it is a well received and a timely poke at all things sly and silly.

The play starts as a police stakeout, trying to nap a crooked mayor with the help of his new accountant, the setup person, in a setup akin to a cheesy episode of Starsky and Hutch. Eric and Billie, newbie police officers, are given this assignment. Eric (Noah Schaefer) is a little nebbish and not comfortable with guns, yet had stoked the ledger of accountant Karen (Emily Levey) the day before, and their burning loins stoke the action and also give him incentive and bravado when needed. That he falls in love with the accountant and we see Schaeffer develop a backbone in the process is a hallmark of the show. Our ingénue accountant, Levey is convincingly put off by minor things as being videotaped in her undergarments, winding up in bed with who knows who and working on her attraction to Eric.

Billie (Jenna Lawrence) is played with a bright-eyed innocence, even showing up in her uniform blues for an undercover assignment. She starts out slowly—as the play itself – but delivers in the second half both with her physical comedy, especially as a tied up prisoner, bounding about from room to closet to bed–and her perfect translation of an angry hitman Scotsman with a Highland brogue that can’t be cut with a knife. More on that later.

The Mayor, played almost in a dandyish take, was a nice contrast by local stage vet Mario Baldessari. His nimble movement and darting eyes were just the thing for the man under suspicion.

Then there is Agent Frank. A gem of a role for an actor, the derring-do of Agent Frank (Christopher Herring) was a delight. His Inspector Gadget/Dragnet take, all arms and legs and imperious poses before breaking into cowardly tears, was a highlight in the midst of all the other criminally funny activity. As sent ahead to ensure that the Mayor is safe, he jumps into action and into bed with equal vigor and his preening and verbal exercising of security jargon was hilarious. Especially when he invokes that dirty subplot. Todd is coming.

The local syndicate is a dreaded Scots clan (go with it) controlling the mayor and its evil acts are carried out by the hitman known only as Todd, a person Agent Frank also works for (go with it). The dread hitman Todd (Keegan regular Jon Townson), fierce and towering in stature, only does his killing after playing his pipes and in full regalia. Townson’s remarkable Scot-talk, intelligible or not, was an added treat, as was his glass jaw–part of the pratfalls of the play.

Think of farce as a nice serving of dessert—it doesn’t really sustain you, but it makes you feel good for a while. If one examined this farce more closely, it wouldn’t hold up to scrutiny, but let’s not get too serious about a Scottish criminal gang with a hitman in a kilt in an average American town. Just focus on the hilarity of it all.

Director Ray Fick deftly maneuvers this ensemble cast through an uproarious story and plays laughs well, though some of the room to room interplay could have been tighter. Matthew Keenan’s set design was effective yet simplistic. Angles could have been used to better design for doorways.

If you are in the mood for something diverting, slightly raunchy, and delightfully silly, go see “Unnecessary Farce,” and of course, to understand the title, in that charmingly unintelligible Scot brogue.

Running Time: One hour 45 minutes and one 15-minute intermission.