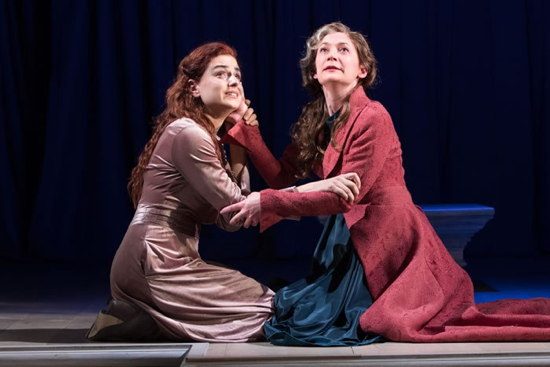 “A Winter’s Tale” according to Standford University’s Stephen Orgel, “is a story to be told or read in front of a fire on a long winter’s night.” In this season of never-ending, blistering Nor’easters, I can’t think of a warmer more beautiful play than Folger’s new production of Shakespeare’s “The Winter’s Tale.”

In a word: Magical.

Directed by native DC playwright, Aaron Posner of “District Merchants” and “No Sisters” fame, the story begins in the Court of Sicillia.  King Leontes, for some reason, believes that his pregnant wife, Hermione, is having an affair with his friend the King of Bohemia, Polixenes. In a jealous rage, he hires one of his subjects Camillo to dispatch Polixenes, but Camillo confesses to the King and they both fly back to Bohemia. Meanwhile Leontes throws his wife into prison where she gives birth to their daughter. After Leontes banishes his infant daughter and finds Hermione guilty, his son dies. Having heard that both of her children are dead and Leontes thinks that she betrayed him, Hermione dies of despair. What follows is a tale unlike any other of Shakespeare’s plays.

Actor and Playwright Michael Tisdale stars as Leontes, the tyrant king. In spite of the character’s actions, Tisdale’s Leontes is likable, even rational. His reunion with his family is a joyful occasion rather than an uncomfortable one.

“The Winter’s Tale” has two of the most coveted female roles in all of the canon. Folger Alumna Katie DeBuys returns in a phenomenal portrayal of Hermione, who in spite of her husband’s remains strong and steadfast. One of the most magical of Shakespeare’s women, Paulina, is played by the most magical actress Grace Gonglewski, winner of no less than five Barrymore awards.

Aldo Billingslee plays the King Polixenes in his regal form and in his hilariously disguised form. Eric Hissom excels as the Storyteller, and as Camillo and Antigonus.

The play is technically astounding, with a set designed by the incredible Luciana Stecconi, that reminds one of an illustration from a hand-painted book. Kelsey Hunt, designer for Ford’s Theatre’s production of “Who’s Afraid of Virginia Woolf?”, designs the fantastical garments of the worlds of Sicilia and Bohemia. Light Designer Jesse Belsky plays with wintry lighting for the Russian-esque kingdom of Sicilia, and warm sunlight for the seaside of Bohemia.

“The Winter’s Tale” is not as well-known as Shakespeare’s other works but it has all the heart and wit of the Bard. It also has some of the most surreal bits of stage business that put it more in line with a Greek Tragedy or a Grimm’s fairy tale. Puppets, music, suspense, and laughter abound in a play that warms the spirit against the bitter cold of long winter’s night. In a word: Magical.

“The Winter’s Tale” is running at the Folger Theater from March 13th to April 22nd. For more information or to purchase tickets click here.