Theatre Review: ‘The Servant of Two Masters’ Doubles the Fun at Synetic Theater 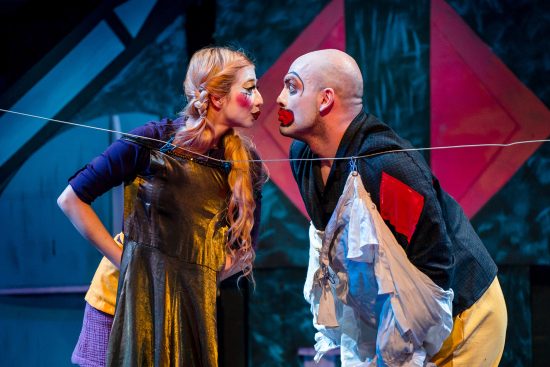 Maryam Najafzada and Vato Tsikurishvili in “The Servant of Two Masters.” Photo by Johnny Shyrock Photography.

If you need a pleasant escape from the world right now, look no further than Synetic Theater’s new staging of “The Servant of Two Masters.” A brilliant farce, this lighter than air story is anchored by Synetic’s style and sincerity.

It is based on the 18th century play by Italian playwright Carlo Goldoni, with roots in the commedia dell’arte. The plot is a delightfully byzantine comedy of errors which is wonderful to watch, but almost needless to describe. Suffice it to say the story follows three romantic couples: Beatrice and Florindo, lovers who are separated and looking for each other; Clarice and Silvio, lovers who want to wed, but are thwarted by Clarice’s father; and Truffaldino and Smeraldina, the titular servant and a mischievous hotel maid.

Commedia dell’arte is most recognizable for stock character types and story tropes (thwarted love, for example), but also for tumbling and physicality, which certainly plays to Synetic’s many strengths. The top of the show finds the reverie of Truffaldino (Vato Tsikurishvili, also directing) interrupted by a thrilling chase scene, as Beatrice (Nutsa Tediashvili) and Florindo (Jacob Thompson) run from a police officer (we learn why later in the story). The impressive choreography finds Florindo making parkour-like leaps to successfully evade the law.

A brilliant farce, this lighter than air story is anchored by Synetic’s style and sincerity.

Synetic’s excellent design team guides the viewer through the story’s twists and turns. Similarities in the vibrant costume and makeup design (by Aleksandr Shiriaev) identify romantic pairings. Phil Charlwood’s elastic set provides the building blocks for all the story’s places, including the hotel interior where Beatrice and Florindo try to lay low, unbeknownst to each other. Konstantine Lortkipanidze’s diverse score, as in other of Synetic’s wordless productions, provides emotional subtitles for the action.

Director Tsikurishvili, who also adapted “Servant,” paces the action nicely, providing high contrast between the many comedic scenes and the central dramatic romance. Nutsa Tediashvili is excellent as the tortured Beatrice, bringing real feeling to her sorrow in losing her lover. She also makes the most of her character’s comedic turns, especially when she’s disguised as her brother, complete with quirking mustache.

While Beatrice and Florindo’s affair plays out in a darker register, Truffaldino and Smeraldina’s (Maryam Najafzada) playful romance provide the best comic interludes of the show. An extended scene involving the two servants, a vat of dough, and a game of charades is wonderfully weird and laugh-out-loud funny. A trickster-type figure, Truffaldino’s decision—to become a servant to both Beatrice and Florindo at the same time—drives much of the story’s hijinks.

In his playbill notes, Tsikurishvili points to silent film stars Charlie Chaplin and Buster Keaton as inspirations, and both he and Najafzada (who is also the choreographer) demonstrate the perfectly studied physical humor of those screen icons. Nasfazada is a particularly expressive performer, physically and emotionally, imbuing the character’s tiny gasps or eyebrow raises with meaning. Tsikurishvili expertly communicates his character’s emotional roller coaster, especially in a madcap scene where his double-dealing with Florindo and Beatrice careens towards chaos.

“Servant” feels like a companion piece to Synetic’s 2019 staging of “Cyrano de Bergerac,” also directed by Vato Tsikurisvhilli, and another adaptation that used the style of pantomime. While “Servant” ends on a brighter note, both shows draw on historic theatre traditions and tropes to create something impressively original.

“The Servant of Two Masters,” runs through April 26, 2022 at Synetic Theater, Theater at Crystal City, 1800 South Bell Street, VA 22202. For tickets and more information, visit their website. Synetic will be hosting a benefit performance for Ukraine on April 29. Learn more about the event on their here.