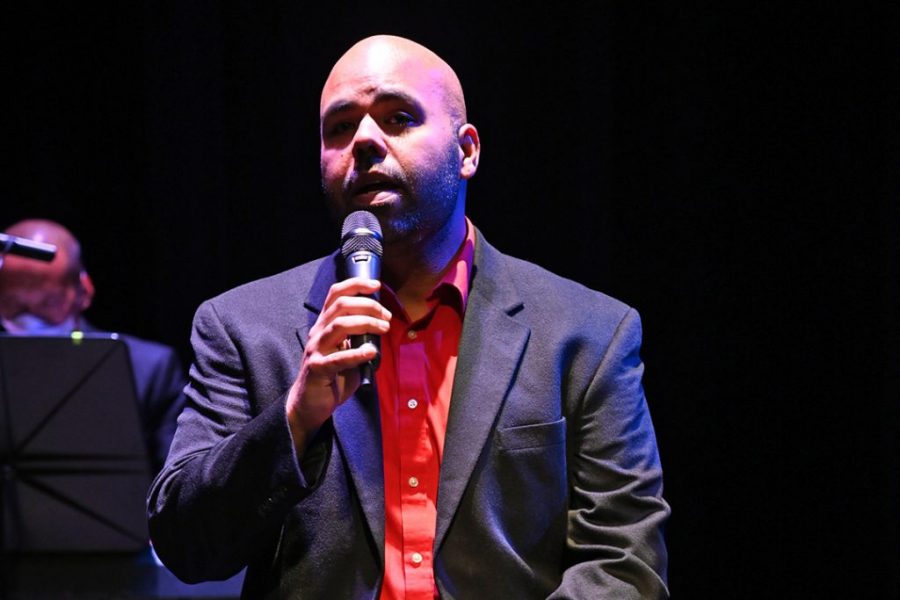 Jarrod Bennett sings “Over the Rainbow” in JUDY. Photo by Michael Key.

Judy Garland may have left us to go over the rainbow, but her star has never dimmed. Gay Men’s Chorus of Washington, DC (GMCW) beautifully illustrated how the legend’s influence shines on in their intimate cabaret entitled “Judy,” under the artistic direction of Thea Kano and music direction of cabaret pianist Alex Tang.

Featuring a small jazz trio and mostly solo performers, chorus members took the audience on a journey through their personal connections to the music of Judy Garland in short monologues before each number. Some were melancholy, some humorous, some touching, and one outright epic tale of a young gay boy’s dramatic weeks-long sob-fest to persuade his parents to purchase him a coveted Judy Garland LP collection (which ended in valiant success!)

I appreciated how each vocalist sought to find their own artistry within a thoughtful tribute to a Judy classic, allowing us to both enjoy hearing the standards as we know and love them while still being surprised and delighted by the individuality of each performer. Chuck Willett was a particular standout on “Hello, Bluebird” with his playfulness on each reiteration of the title phrase, not to mention his outstanding eye contact and engagement with the audience, truly giving us that cabaret flavor.

Rinaldo “Rini” Martinez also brought the flair with his bawdy rendition of “The Trolley Song,” paying naughty attention to certain sound effect lyrics and enhancing their effect with corresponding gestures that gave a tasteful but oh-so-fun hint of the risqué. Adam Edgerton demonstrated a truly impressive mastery of dynamic control in his rendition of “Come Rain or Come Shine.” He spun from quiet to loud and back again on single, rapid notes and made it appear effortless, drawing me into a song whose melody might not have otherwise engaged. Instead, I was kept on the edge of my seat by his exciting performance.

Rob Hall treated the audience to a lovely, heart-wrenching rendition of “Smile,” prefacing his song by recounting Judy’s struggles with depression, and one particular performance he had found where she sang the song almost to herself. I greatly appreciated the wistfully haunting energy he brought to his interpretation. Ellery Rhodes gave a powerful performance of “Have Yourself a Merry Little Christmas,” explaining to us how they loved the lyrics “we’ll have to muddle through somehow” as a child, and was distressed to hear the prevalent sanitized version “hang a shining star upon the highest bough” take its place in most non-Judy covers. They put their heart and soul into their vocals, and it showed.

While there were too many performers to name, all outstanding, my favorite performer of the night was undoubtedly Jarrod Bennett with his stunning rendition of “Over the Rainbow.” He stripped the performance of all pretense and sang from his heart for his sister, who, he explained, had passed away. Bennett gave us a Gospel-influenced performance with runs that were solely emotive rather than for show. His raw pain seemed to flow straight from his heart into his voice, and he was given a rousing standing ovation by the audience. I still feel goosebumps.

“Judy” was an outstanding example of the ability of the GMCW to deliver intimate performances as well as grand, full-chorus affairs. Unfortunately, it was a one-night only run, but I strongly encourage readers to attend an upcoming performance of GMCW. I am sure that you will not leave disappointed!

“Judy” ran on one night only on October 22, 2022 presented by the Gay Men’s Chorus of Washington, DC at The Vault, Capital One Hall, 7750 Capital One Tower Road, Tysons, VA 22102. For information on upcoming events by GMCW under the direction of Dr. Thea Kano, click here.