Theatre Review: ‘Much Ado About Nothing’ at Shakespeare Theatre Company 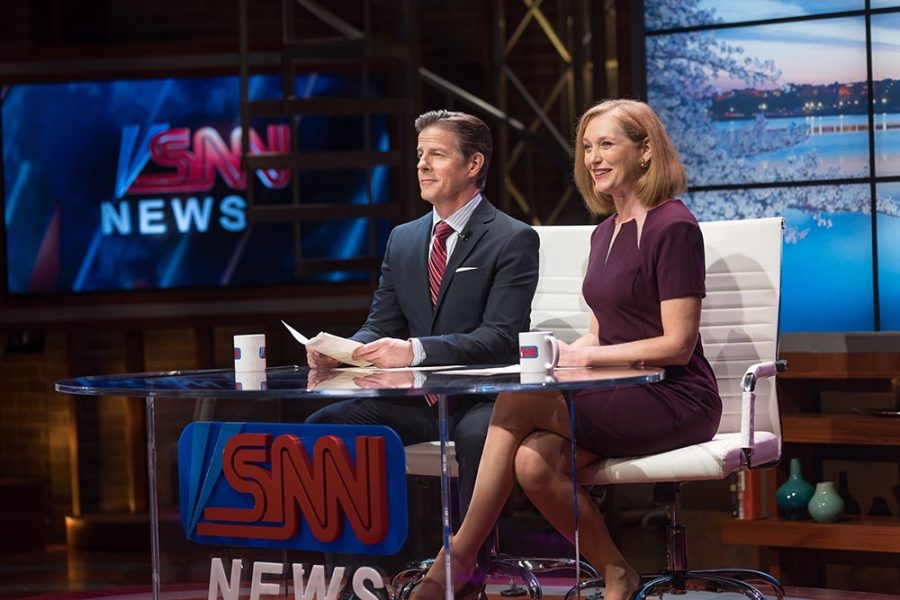 Rick Holmes and Kate Jennings Grant in “Much Ado About Nothing.” Photo by Tony Powell.

Shakespeare Theatre Company’s new production of “Much Ado About Nothing,” delayed from its intended season in 2020, is worth the wait. This fizzy romp, confidently directed by Artistic Director Simon Godwin, dials up the comedy for a laughter-filled evening supported by a solid ensemble.

Godwin translates Shakespeare’s original story to a modern cable newsroom, the amusingly fictional SNN (the Shakespeare News Network). The shiny TV screens and neon glow of Alexander Dodge’s sleek set, coupled with the trim, camera-facing tailoring of Evie Gurney’s costumes (read our “Quick 5” interview with her here), establish a sense of corporate assuredness. You get the sense that Godwin chose the smooth, conservative setting of broadcast news to contrast with the very messy tangle of human drama that drives the plot.

That human drama starts immediately with polished news anchor Beatrice (Kate Jennings Grant) protesting, perhaps a bit too much, the return of co-anchor Benedick (Rick Holmes), who has been away for a war reporting stint. He returns as part of the retinue of Don Pedro (Carlo Albán), a media mogul, with Claudio (Paul Deo, Jr.), a rising young weather reporter, and ne’er-do-well Don John (Justin Adams), Pedro’s disgraced brother, on probation for drug possession.

Romance blooms almost at once, as Claudio declares feelings for Hero (Nicole King), a young sports reporter, and the daughter of SNN studio head, Leonato (Edward Gero). After dodging a malicious misunderstanding at the company costume party, the two become engaged, the start of a twisty marriage plot that fuels the story. Clever costuming at the party outfits Claudio as juvenile icon Robin (to Benedick’s Batman) and Paul Deo, Jr. does a nice job imbuing the character’s passion with a dose of adolescent pique, foreshadowing how easily the villainous Don John will later lead him astray.

This fizzy romp, confidently directed by Simon Godwin, dials up the comedy for a laughter-filled evening supported by a solid ensemble.

But the central romance is, of course, between the adult lovers, Beatrice and Benedick, and the show’s best innovation by making them co-anchors is to give them more time to verbally spar. A delightful running gag are their news segments together, “reporting” on other Shakespeare plays (news flash, things aren’t going well for Hamlet). Kate Jennings Grant and Rick Holmes expertly maneuver a few madcap scenes of impressive physical comedy, as well as their later tender moments together dealing with the fallout from Claudio and Hero’s romantic combustion.

While the staging allows dramatic pauses after that dour event, it’s soon brightened by the hilarious network security team, lead by the wildly self-confident Dogberry (an excellent Dave Quay). Needless to say, they save the day very much in spite of themselves. Like the humor in the rest of the show, the bumbling troupe’s comedic timing is incredibly precise, while many of the beats are so relaxed as to feel ad-libbed.

The fun, party-like atmosphere that pervades the show even comes with a dance-y version of “Sigh no more, ladies, sigh no more” performed by Raven Lorraine. Men may be deceivers, as the song says, but this show will convert your sounds of woe into hey nonny, nonny.

“Much Ado About Nothing” runs through December 11, 2022 at the Shakespeare Theatre Company, Harman Hall, 610 F Street NW, Washington, DC 20004. Go to this link to purchase tickets. The venue has modified COVID restrictions: STC will be hosting “Mask required” performances on Tuesdays, Wednesdays, and Sundays and “Mask recommended” performances on Thursdays, Fridays, and Saturdays. See more health and safety information here.