Annie Baker’s play Circle Mirror Transformation had a production at Studio Theatre two years ago after premiering Off-Broadway at Playwrights Horizons. In the past several years, it has become a regional theatre favorite. This week it is back in DC at George Washington University (GWU). This excellent production opens GWU’s Theatre and Dance Department’s 2011/2012 Mainstage Season. 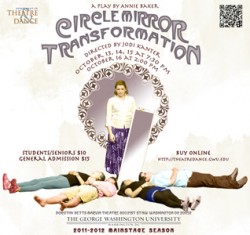 The play chronicles six weeks of an adult acting class in the small town of Shirley, Vermont. Four students (James, Lauren, Theresa, and Schultz) and one teacher (Marty, skillfully and convincingly played by Hillary Kelly) engage in a series of improvisational acting games. While improving their acting skills, they learn much about themselves and each other. Occasionally, there is conflict between the class members, but in the end, they form a bond with one another and the value of their shared experience goes beyond learning to act.

Each student (and the teacher) brings a life experience to the class and through the acting exercises, they find ways to share those experiences and, in many cases, learn how to deal with them. James (Sam Game), who is married to Marty, focuses on his marriage and family life. Lauren (Jenna Duncan), a young girl who wants to be an actress, focuses on her family situation and the expectations she places on herself. Theresa (Christine Alexander), a professional actress who moved to Vermont to escape the stress of New York, struggles with her romantic past. Schultz (an endearing Max Schwager) also struggles with his romantic past (and present) as he seeks to move on from his recent divorce.

The cast members appropriately embody their characters. The ensemble is uniformly strong and shows great skill in organically presenting the material and the emotions that are called for at each moment. Although every cast member has great talent (and hopefully bright acting futures) and plays their roles convincingly, we find Schwager to be particularly heartbreaking and endearing as Schultz and Duncan to be quite naturally funny, sarcastic, and interesting as Lauren. She thankfully shows great restraint as her role could have been played much campier. She has a very likeable and charming presence on stage. Alexander is quite perfect as slightly unstable Theresa and has a natural and confident presence on stage. Kelly and Game also give well-crafted performances.

The young cast works well together under the direction of Jodi Kanter. The production values are quite fine, including Tiffani Corley’s minimal set, which depicts a room in a community center; it serves the production very well. The multiple mirrors are an appropriate touch. Paula Rae Wang’s modern day costumes are appropriate for each character type and his/her station in life. Adalia Vera Tonneyck’s lighting is subtle yet mood-enhancing. Lianna DeBor’s sound design is limited to pre and post show music and one cell phone ring. The scene transitions could use some musical interludes, but overall, the design is effective because this kind of play does not require a ‘busy’ sound design.

Overall, GWU’s Theatre and Dance Department does a great job with this very strong play. We look forward to its future offerings and urge you to go see this particular production. The script is wonderful and it is skillfully presented by a dynamic group of young talented actors.

Running Time: 1:45 with no intermission.