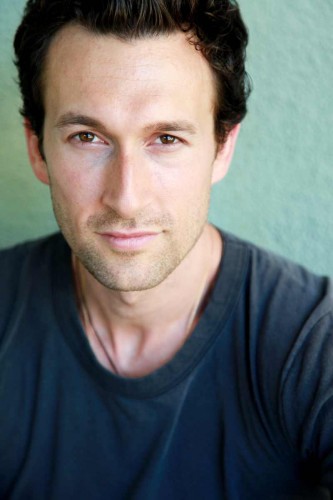 There aren’t too many cabarets that I’ve attended that include selections from traditional and contemporary Broadway musicals, the great American songbook, and pop music albums recorded in the 1990s and result in one cohesive and coherent performance.

Certainly, Broadway star Aaron Lazar gets credit for making this eclectic mix work in his one-night-only concert.  I’ve attended nearly all of the concerts in the Kennedy Center’s Barbara Cook’s Spotlight Series to date and while all of them featured some exceptional singing by Broadway and West End talent, Lazar is one of the few to create a seamless cabaret, which features both high-quality singing and a not-too-saccharine story through-line.   His personal stories, which flowed well with the song selections, offered compelling insight on what drives this young talent, where he came from, and where he wants to go. His personable and natural stage presence, coupled with his strong voice, made this concert a must-see for Washington area audiences.

Lazar is perhaps best known for his performances in the recent Broadway revivals of Les Miserables and A Little Night Music.  His turn as the romantic male lead in The Light in the Piazza was also captured in the PBS telecast of this award-winning Lincoln Center production.    His performance at the Kennedy Center featured the kind of singing one would expect from such a talented tenor.  Energetic and first-rate accompaniment by music director/pianist Jesse Kissel also made the concert that much more enjoyable.

Although every song was of impeccable quality, there were several standouts. “If I Loved You,” the iconic song from Rodgers and Hammerstein’s Carousel, featured tender vocals and exquisite song interpretation.  “All I Ask of You/Music of the Night,” both popular selections from Andrew Lloyd Webber’s The Phantom of Opera, are generally overdone.  However, Lazar brought these power ballads to new heights and made me forget that the songs have been heard too many times before.  His full range, never faltering on the high notes, was on display in all of its glory.  His performance of “Pretty Women,” from Stephen Sondheim’s masterpiece Sweeney Todd, reflected the strong influence the composer has had on Lazar’s show business career.  His love for Sondheim’s music shone through as he traversed the difficult melody and rhythm.  His closing number, the lesser performed “Look for Me in the Songs” (by Craig Carnelia), was the highlight of the night for me.  His clear love for his chosen career was fully demonstrated in this beautifully constructed number.

The concert included other highlights.  Both Jason Robert Brown’s “Shiksa Goddess” (from The Last Five Years) and Adam Guettel’s “Love to Me” (from The Light in the Piazza) hold special meaning for me because they were featured in one form or another at my wedding.  The tongue-in-cheek element of the former song was not lost on the Kennedy Center audience as Lazar performed the song with great abandon.  His rather funny description of his girlfriend meeting his family for the first time provided a nice introduction into the song, which explores interreligious relationships.  “Love to Me” allowed Lazar to revisit his role as Fabrizio.  Although I would have liked the song to feature guitar in addition to, or replacing, the piano, Lazar provided an earnest yet emotionally-connected interpretation of the song.  This particular selection does not require vocal frills so I was glad to see Lazar stuck with a ‘less is more’ approach to singing it.

He also found great humor in several numbers that most musical theatre aficionados would not expect to be mashed together.  A Money Medley, comprised of “Great Big Stuff” (from David Yazbek’s Dirty Rotten Scoundrels), “If I Were a Rich Man” (from Bock and Harnick’s Fiddler on the Roof), and 96 Thousand (from Lin-Manuel Miranda’s In the Heights) was certainly innovative and interesting.  More to the point, Lazar demonstrated great versatility as he interspersed rap and traditional showtunes.

Between songs, Lazar treated the audience to personal stories about his upbringing, his first ventures into New York/show business, his family, and his time performing with Elaine Stritch and Angela Lansbury.  While this ‘bear your soul with personal stories’ approach to a cabaret can often overshadow the singing, Lazar made it work quite well.  Each story flowed nicely with his song selections and none of them seemed out of place.  He did not have to try too hard to make the audience fall in love with them.  It just happened.  I’d suggest that anyone who has a chance to catch Lazar in concert should make an effort to do so.

This performance was a one-night-only event on Friday, May 4, 2012 at the John F. Kennedy Center for the Performing Arts in Washington, DC.  For tickets to other theatrical productions and cabaret performances at the Kennedy Center, call the box office at 202-467-4600/1-800-444-1324 or purchase them online.