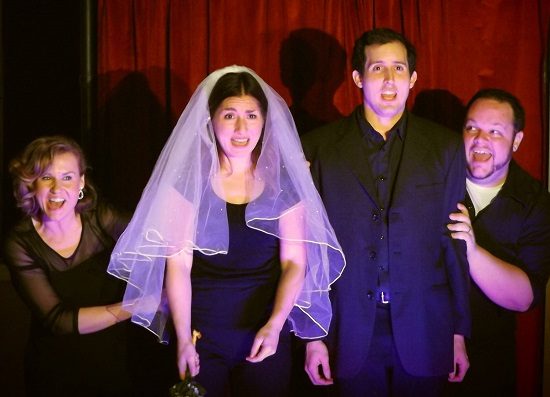 It is kind of ironic that a new Baltimore-based theatre company which call themselves Epic Productions has chosen a small, modest musical with only a cast of four to be their inaugural show.

Directed by David C. Jennings, I Love You, You’re Perfect, Now Change is a romantic musical comedy revue from the 1990’s with book and lyrics by Joe DiPietro and music by Jimmy Roberts.  Written as a series of vignettes, the stories are connected by the central theme of love and relationships.  Topics such as first dates, breaking up, marriage, having children, and divorce are all explored.  Joe DiPietro sums up the show by saying, quite simply,  I Love You, You’re Perfect, Now Change is about “people trying to connect.”

‘I Love You, You’re Perfect, Now Change’ is a light-hearted and endearing musical, just right for those who have ever played the mating game.

Performed at the Ciao Bella Restaurant, located in Baltimore’s world-famous Little Italy, this dinner and show setting provides a romantic atmosphere suitable for this production.  The limited, intimate seating of less than a few dozen allows for the four performers and two musicians to be up close and personal with the audience.

A portion of the restaurant floor is used as the performance space.  There is a self-standing red curtain for the actors to make entrances and exits, a few stage lights, and some props.  And as simple as the whole set-up is, the evening was very enjoyable and entertaining.

A scene and song called “A Stud and a Babe” is about a couple on a first date trying to impress one another.  At first, actors John Dellaporta and Emily Levey portray a couple who believe that dating would be easier, if only they were each a stud and a babe.  Soon, the couple begins to relax and be themselves. They admit to each other that they are not a stud and babe. Emily breaks down, revealing to John that she is “awkward and whiny;” after which, he says to her that his “biceps are tiny.”  It is true that the scene and song is cheesy, but that doesn’t mean that I didn’t gladly eat it up, thanks to John and Emily’s endearing portrayal.

Another cute scene and song is called “Tear Jerk” where actors Michael Kenny and Tara Taylor portray a couple who go out to the movies on a date.  Macho Michael wants to see a manly action film while Tara wants to see a romance.  Michael gives in and lets her choose the movie.   He says to himself, “I bet she’ll get all weepy, while I get very sleepy.”  Soon, no surprise, his character begins to weep uncontrollably during the romantic part of the film. Luckily his date is impressed and says to him, “You know I love a man who’s not afraid to cry at the movies.”  Both Michael and Tara are really good at pulling off comedy.  Michael reminded me of a young Nathan Lane while Tara is especially skilled at connecting to the audience.

The original instrumentation for I Love You, You’re Perfect, Now Change calls for a piano and violin.  Here they use a keyboard and a mandolin.  Charlotte Evans serves as the musical director and pianist.  Her playing is quite exceptional in bringing to life the score by Jimmy Roberts.  David Evans on the mandolin also adds some nice embellishments to the music.

I Love You, You’re Perfect, Now Change is a light-hearted and endearing musical, just right for those who have ever played the mating game.

I Love You, You’re Perfect, Now Change plays through February 15, 2015 by Epic Productions performing a Ciao Bella Restaurant – 236 South High Street, in Baltimore. For tickets and dinner reservations, call the box office at (443) 791-2671, or purchase them online.