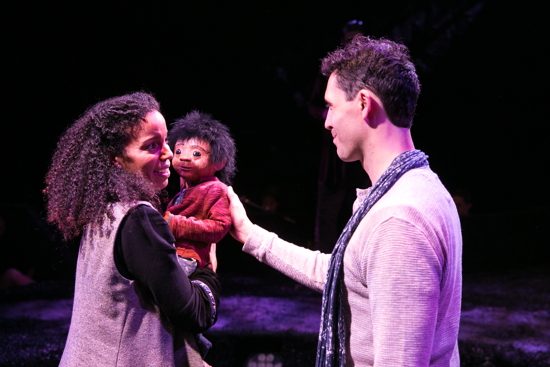 Yesenia Iglesias as Grusha and Drew Kopas as Simon in The Caucasian Chalk Circle. Photo by Daniel Schwartz.

Bertolt Brecht’s “The Caucasian Chalk Circle” is a brilliant exploration of the power of moral “goodness” in a world where morality is seen as a zero-sum game; doing what is “right” is regarded as foolish and stupid. The play relentlessly brings to the forefront that committing to a moral act when there is no foreseeable payoff is a process of questioning, hesitation, movement, and perhaps, finally, blind faith.

This world is dark and Grusha is a flickering light in that darkness.

Grusha (incandescently inhabited by Yesenia Iglesias) is a servant who is living in a town in a country that is being wracked by unrest and a great divide between the haves and have-nots. There is a military coup and chaos naturally ensues. With alliances shifting moment to moment, Grusha chooses to save a completely innocent life—the baby son, Michael, of the overthrown governor and his amoral, selfish wife who deserts the infant in favor of her shoes and a fur-collared coat. This choice will cause Grusha to flee to her brother and his wife, her only living relatives, through a nightmarish, war-torn and starving countryside. She places the child’s needs first and reaffirms that commitment with every choice she makes. It is not the sensible or cautious thing to do, but the right thing. She makes it work even at the cost of her own happiness. The child’s needs become hers—if she can keep the child alive and thriving, he can survive, and perhaps change their world.

The show is incredibly immersive; the seats are within the pathways and mountains and town squares that populate environment. Actors are at times mere inches from audience members and it is galvanizing to be stabbed with a glare or invited with a smile to come, agree with us that my survival is the only one that matters. This world is dark and Grusha is a flickering light in that darkness.

This is a big production with 14 actors (playing 60 characters) and five understudies, plus two musicians (Manny Arciniega on percussion and Benamin Lurye on keyboard) in a little cave of a space. The movement is both frenzied and disciplined. While everyone on that stage is impressive in whatever main and subsidiary role they are playing (the fierceness of the two palace guards was palpable), Teresa Spencer as the governor’s wife and Matthew Schleigh as the singer/Azdak are particularly memorable. As the governor’s wife, Spencer is physically lovely, while her character is innately corrupt; one senses she cannot change—it simply isn’t within her. Schleigh does a gorgeous job as the singer who is narrating this story and then is most slyly happily corrupt as the judge Azdak. He’ll survive in this new order they find themselves, and he does the right thing at the end, even if not for the purest of purposes.

This is a play of big ideas and big questions. It demands the audience think while entertaining them. Constellation is known for producing plays that are epic in nature and in this production has brought to life Brecht’s questioning of an entire social order. The immersive seating arrangement and 10 different entrances draw the audience in fully. You might leave feeling a bit gob-smacked, but you will leave pondering what you might do if your world turned upside down and decisions had to be made quickly because your very survival was at stake. In other words, how moral could you afford to be?

This production of “The Caucasian Chalk Circle” is from a new translation by British political satirist Alistair Beaton. It is sublimely directed by Artistic Director Allison Arkell Stockman. The costumes are by Kelsey Hunt; the atmospheric lighting and flawless set design is by A.J. Guban; Matthew Aldwin McGee is the puppet designer, and the brilliant choreography is by Tony Thomas III.

Advisory: For those aged 16 and older due to strong language.

Running Time: Two hours and 40 minutes with a 15-minute intermission.