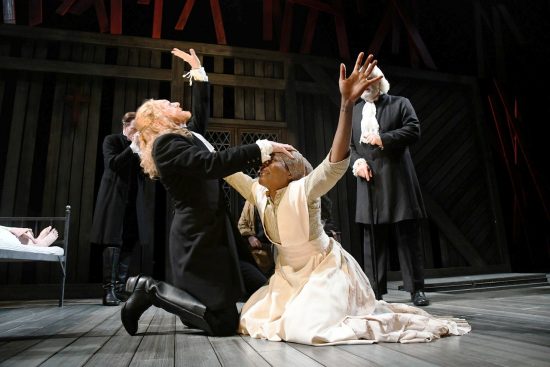 For over a year, we’ve been subject to the incessant accusations of “witch hunt” from our president referring to the ongoing Russia probe.  Whether or not there is validity to those claims is under debate.  There were, however, unquestioned witch hunts in our history, such as the McCarthy accusations of Communism against those within the State Department and beyond, and until the repeal of “Don’t Ask, Don’t Tell, the expulsion of gays and lesbians from the military.

In Arthur Miller’s classic, “The Crucible,” currently being presented at the Olney Theatre Center, an actual witch hunt is portrayed.  Loosely based on historical facts, Miller had crafted a four-act play (separated by one intermission) depicting the infamous Salem witch trials of 1692 in the Massachusetts Bay Colony.  He had written this play as a parallel to the aforementioned McCarthy era of the early 1950’s, and it captured a Tony Award for Best Play in 1953.

Though the setting for “The Crucible” occurred centuries ago, today’s culture can be examined through the lens of the play. Baseless suspicion and the spreading of rumors on social media, for example, can have devastating consequences.

Miller captures the horrors of that period in a Puritanical society where the Christian Bible and state laws were one of the same.  Paranoia and hysteria were prevalent.  Grudges were commonplace and seemingly irreconcilable. Morality ruled the day and everyone’s religious activities were under intense scrutiny. There was no tolerance for anyone deviating from moral laws.  And many in Salem were fearful of guilt by association, which could damage their reputation—a major theme throughout.

Then there is the absolute necessity for self-preservation where people would say anything and fabricate stories to protect their own interests.  In other words, throwing people under the bus to save their own hide was a way of life, which directly led to the tragic imprisonment and executions that was the outcome of the witch trials.

Under Eleanor Holdridge’s meticulous, first-rate direction, the ensemble cast of 19 talented actors leaves nothing on the stage, and they perform like it was the last thing they were ever going to do.  The actors demonstrate enormous levels of energy and passion and are clearly invested emotionally in their roles.  And they do it with tremendous skill.

The plot is a labyrinth of moving parts with twists galore, and it’s pure frightening at times.  Accordingly, I will not divulge much to detract from the dramatic effect for those who are fortunate enough to see this presentation.

It all starts when the Reverend Samuel Parris, played forcefully by Michael Russotto, is tending to his 10 year-old daughter, Betty (Caroline Rilette/Mia Rilette), lying lifeless in her bed.  Earlier he had discovered Betty and a bunch of girls performing some suspicious ritual in a nearby forest though the ringleader, Abigail Williams (played by Dani Stoller), maintain they were merely dancing.  They fall ill with no ostensible explanation.  The hysteria among the townspeople develops whereby many are convinced witchcraft has enveloped the town and the arrests, trials and punishment of those suspected ensue.

Chris Genebach is exceptional in the role of the main protagonist, John Proctor.  It was John’s affair with Abigail prior to when the play begins that led to Abigail’s jealousy of his wife, Elizabeth Proctor (Rachel Zampelli). Elizabeth fired Abigail as the family servant once she discovered the affair.  Mr. Genebach’s final dramatic scene is superb.

Abigail, the play’s villain, uses this jealousy as a trigger that sets in motion the hysterical witch hunt with her lies and ability to manipulate people. Ms. Stoller is truly effective in this role.

As virtuous Elizabeth Proctor, Ms. Zampelli conveys an earnest down-to-earth quality.  Her poignant interactions with Mr. Genebach in Acts II and III represent one of the play’s highlights.

Scott Parkinson is convincing in playing the role of young Reverend John Hale from Beverly, Massachusetts.  An intelligent man, Hale was considered an expert on witchcraft. His determinations resulted in the prosecutions of many suspected witches.  Later, he regretted his actions and tried to save the lives of the suspects by persuading them to confess.

Under Eleanor Holdridge’s meticulous, first-rate direction, the ensemble cast of 19 talented actors leaves nothing on the stage…

Brigid Cleary does an excellent job portraying Rebecca Nurse, an elderly respected woman who was sentenced to death after being accused of witchcraft by the wealthy Thomas Putnam (Bolton Marsh) and his wife, Ann Putnim (Jessica Lefkow) and refused to confess.

While he has many other credits, Olney Theatre-goers are familiar with Paul Morella from his wonderful annual one-man performances in “A Christmas Carol.” In “The Crucible,” Mr. Morella exhibits his strong acting gifts as Deputy Governor Danforth—another of the play’s villains.  He doesn’t appear until Act III but his impact on the overall production cannot be overstated.

Danforth is the presiding judge at the witch trials and is commanding and inflexible in his beliefs.  Mr. Morella’s tour de force performance is something to behold.

Lilian Oben as Tituba, an enslaved black woman from Barbados belonging to the Parris family, is convincing displaying anguish towards her accusers.  She was the first person accused of witchcraft when she admitted to creating love potions for Abigail and her friends.

Other notable performances include Miranda Rizzolo as Mary Warren, a Proctor family servant and one of Abigail’s friends, and Craig Macdonald as Giles Corey, an elderly farmer who along with his wife was accused of witchcraft and sentenced to death.  However, the entire cast worked together flawlessly thanks to the guiding hand of Director Holdridge.

Andrew R. Cohen designed a primarily rustic set that captures the 17th century locale. Vertical wooden boards form the walls with rows of shelves for the first two acts. Two trap doors on the stage floor allowed the actors to ascend to and descend from the bedroom scene in Act I.  A more quasi-modernistic set representing the vestry room of the Salem Meeting House is used in Act III and the Salem jail in Act IV. The set also features striking clusters of wooden boards in random criss-cross formations that framed the stage from the sides and above. It conjured up stakes where witches were burned.

Nancy Shertler’s creative lighting design amplified the anxiety and fear that permeated throughout.  Patrick Calhoun’s sound design delivered well-timed background music adding to the mood.  And Sarah Cubbage did an excellent job in fitting the cast in period costumes.

“The Crucible” is by no means a feel-good play.  It’s serious to the core with a few clever chuckles sprinkled among the dialogue. Though not entirely historically accurate as far as individual characters’ ages and other details are concerned, it still presents a grim portrait of this shameful period in history and alarmingly shows that human foibles of that era exist even today.

This American classic that denotes the actual witch hunt is recommended for the historical benefit of the story and especially to witness an extraordinary cast giving it their all.

Running time. Two hours and 45 minutes with an intermission.

Advisory: “The Crucible” contains adult themes and is not recommended for children under age 13.