‘A Quick 5’ with Lisa Stephen Friday, Actor and Writer of ‘Trans Am’ at the Keegan Theatre 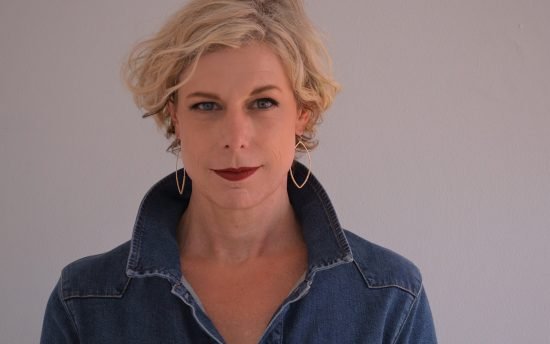 In the fall of 2020, I had the distinct pleasure of reviewing “Trans Am,” a one-woman rock musical, written and performed by the electric Lisa Stephen Friday. Like many productions at the time, the staging was virtual, streaming in real time as Friday performed at the Keegan Theatre, telling stories, singing, and accompanying herself on guitar. Starting January 29,2022 “Trans Am” will have the chance to captivate audiences in person, with its live, world-premiere at the Keegan.

“Trans Am” is autobiographical, featuring chapters from Friday’s life and punctuated by the real-life songs of Lisa Jackson & Girl Friday, the punk rock band Friday fronted for in the early 2000s. Friday’s narrative takes us through her childhood and early music influences to an exciting move to New York City, her rock n’ roll years, and beyond.

In its heyday, Friday’s punk rock band was featured at New York City’s CBGB’s, and was a headliner at the monthly party, Homocorp. The band shared the stage with the likes of The Psychedelic Furs, The Motels, and Pat Benatar. Prior to her years with Lisa Jackson & Girl Friday, she worked as both an actor and singer in New York City, performing in many regional productions at theaters such as Goodspeed Opera House, the Alabama Shakespeare Festival, and The Ordway Theater. In 1999, Friday was in the National touring company of “The Buddy Holly Story.”

Friday also has an extensive career on the production side of theatre. She spent 10 years as the foreman of the Stephanie P. McClelland Drama Theatre at the Juilliard School in New York. She currently works as a project manager for Barbizon Lighting in Washington, D.C. where she manages the installation of performance lighting and rigging systems in new construction and renovations of performing arts venues, museums, and television studios.

The show was developed with input from director Fred Berman who is also a former bandmate. Set design is courtesy of Matthew J. Keenan, with projections designed by Jeremy Bennet and lighting by John D. Alexander.

The current show is a rock musical and features songs from Lisa Jackson & Girl Friday, the punk rock group for which you fronted. How do music and theatre intersect for you? How do those personas compare?

I feel like I’m coming full swing back into a theatre career as a performer, but now it’s on my terms. I am now able to show up in that space as a woman, and as the woman I am. I think that “Trans Am” has been the venue for me to bring together the rock star persona and just my actualized self as a woman.

The rock star persona always allowed me to step on stage and let go of my imposter syndrome as a trans woman. It has taken me 20 years of living in my trans-ness to come to the place where I can step on stage as the woman that I am in a legitimate acting role. I feel confident in that space and I do not feel like an imposter anymore.

What was the inspiration for “Trans Am?” Why and when were you motivated to start creating the show?

I would say that I always fantasized about some kind of elevated rock n’ roll show for myself. When I was a kid, I would put the music speakers playing the radio in the bed with me. I was supposed to be going to sleep, but I was listening to Duran Duran. I wanted to feel the music, and I would fantasize about what my rock n’ roll show would look like.

As I became a musical theatre performer, I was drawn to shows like “Tommy” and “Hedwig”—shows that had that rock n’ roll thing going on, and the sound of those musicals and the visual aspect of them. I think those highly influenced “Trans Am.”

Then in 2017, Lisa Jackson & Girl Friday did a couple reunion shows in New York City. It was the beginning of the Trump administration and there was an onslaught of chaos going on towards trans people. That’s when I really started to think, “how do I get back on stage now as a trans woman who has a lot of history, to use my voice and tell my story?” That planted the seed for what “Trans Am” is now. The show is the realized version of those two concerts in 2017.

You’ve written music before, and this is your first time as a playwright. What was special about that experience?

By the time I was in fourth grade, I was starting to be put in special ed classes, [to help with] reading comprehension and dyslexia. I really excelled at verbal communication, but I always had this chip on my shoulder that I was not a good writer.

But when I write songs, I’m not charting it out—I write lyrics on a napkin or sing into the recorder on my iPhone. All I’m doing is telling a story. When I write lyrics, I don’t care if I spell them right because no one’s going to see them, they’re going to hear them.

Fred [Berman] was instrumental in helping me to simply sit down and write my “Trans Am” story in that same vein. Finally, I let the stream of conscious go without thinking “I don’t know how to spell this word.” I just started writing.

Can you tell me about the process of developing the show with the Keegan Theater—and the creative team?

I approached Keegan in the summer of 2020 when they were shut down. This was before “Trans Am” existed, and I told them I wanted to do a virtual show where I would play my old songs and tell stories about them. We did a virtual concert [that summer] and raised money for black-led social groups in D.C. It was a huge success and people said to me, “your stories were so great.”

Susan Rhea [the associate artistic director] talked to me about doing the show as part of their virtual rep in the fall of 2020—that’s when I said to her that I’d like it to be more of a written piece, with a script. She gave me an opening night, told me to write the script, and hire whomever I wanted to work with as a director. I knew immediately that was going to be Fred [Berman, my former bandmate], as we’re very much on the same page as far as our music influences, age, and pop culture interests. I just knew that he would get it.

We took the storytelling of the songs I performed at that summer concert and that became the foundation of what “Trans Am” was going to be become. Fred had me transcribe all of it from the recorded show, and I began picking and choosing from there to construct the stories that are now the full story of the show.

The original production was live-streamed, and the current show will be in person. What are you looking forward to most about an in-person performance, and why?

I’m really looking forward to having the energy of an audience. It became exhausting to do the show in an empty space [in 2020], even though I knew a lot of people were watching. It’s a pretty big undertaking for an actor. It’s a 90-minute show with seven songs. I also play the instruments and there is constant dialogue—so it’s a huge amount of energy.

When you do a musical with no one in the house, it’s crickets after each song and very hard to get used to. Just a little hand of applause [when the show is in-person] is going to feel like a stadium roar at this point. But we did decide to keep the script 100 percent what it was [when it was live-streamed].

I kind of pinch myself every now and again when I walk into the Keegan and see the sets going up and get a rehearsal report in my email. I’ve worked in theatre all my life, so I know what all these things are. But the fact that all these things are happening because of what I wrote is a little bit of a fantasy come true. I’m just incredibly grateful for every single person that has a part of this. It’s amazing.