Theatre Review: ‘The Prom’ at The Kennedy Center 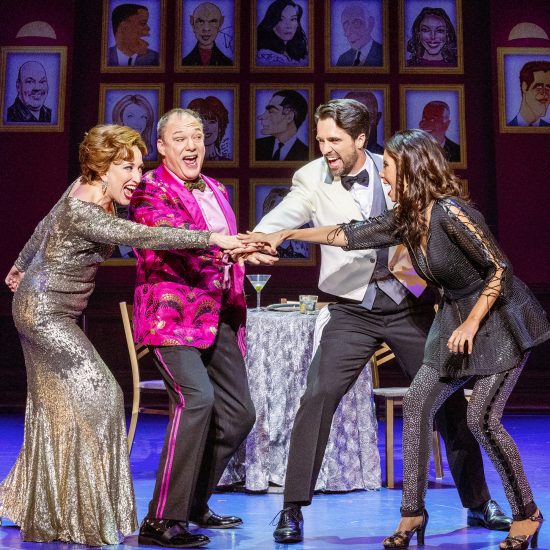 From left: Courtney Balan as Dee Dee Allen, Patrick Wetzel as Barry Glickman, Bud Weber as Trent Oliver and Emily Borromeo as Angie Dickinson in the National Tour of “The Prom.” Photo by Deen van Meer.

The divide between middle America and so-called coastal elites has been much dramatized in recent years, but perhaps one of the most enjoyable incarnations is “The Prom,” a glittering disco ball of a musical, full of fun and charming performances, now at the Kennedy Center.

We’re thrown into the action at the top, as Dee Dee Allen (Courtney Balan) and Barry Glickman (Patrick Wetzel), veteran Broadway actors, eagerly await reviews of their new musical, “Eleanor” (a show of questionable taste based on the life of Eleanor Roosevelt). A creatively-worded pan by the New York Times sends them spiraling, as does their publicist’s explanation that they are simply “not likeable.”

…a glittering disco ball of a musical, full of fun and charming performances.

Joining forces with Trent Oliver (Bud Weber), an overly proud Juilliard graduate who’s only recognized for an old TV role, and Angie Dickinson (Emily Borromeo), a chorine who just wants to play Roxie Hart in “Chicago,” they decide to become “celebrity activists” in order to rehab their image. A quick scroll through Twitter finds them a cause—a young lesbian named Emma in Edgewater, Indiana, whose high school will not let her attend prom with her girlfriend.

The resulting collision of small-town small-mindedness and the larger-than-life showbiz personalities makes for a frequently funny and often touching story. The book by Bob Martin and Chad Begulin, with lyrics by Begulin, is joke-dense, and especially pokes fun at the foursome for their initially clueless handling of the issue. Arriving in dramatic style at the school’s PTA meeting, Dee Dee outlines the group’s mission in “It’s Not About Me” (a showcase for Balan’s incredible vocal range) accusing the PTA of “stealing the rights of a girl/Who is an LGBQ-Teen” while admitting “I’ve been far too angry to google what those letters mean.”

The show finds its emotional center in Emma, played with poignant sensitivity by Kaden Kearney, whose closeted girlfriend, Alyssa (Kalyn West is excellent), is also the daughter of the PTA president. The swift pacing of the story pauses in the couple’s scenes together. In the sweet duet “Dance With You,” they look forward to announcing their relationship at the prom—a fantasy that’s dashed at the end of the first act by a cruel scheme hatched by some of the school’s parents.

The characters and situations—initially drawn with broad, glittering strokes—are gradually filled in as the Broadway interlopers warm to the town, and the town to them. Dee Dee is charmed by the school’s principal, Mr. Hawkins (Sinclair Mitchell), a major fan of her work who encourages her to be just a tad more self-aware. Barry, played with delightful aplomb by Patrick Wetzel, takes Emma under his wing after learning that her parents kicked her out of the house after she came out to them. Buoyed by the support, Emma finds her own voice, leading to a feel-good ending for everyone.

“When our lives come up short/ And our hopes are sad and few/ You whisk us off to some place strange and new,” Mr. Hawkins explains to Dee Dee about why he loves musicals and Broadway. The sentiment perfectly describes what “The Prom” offers—a brief escape to a lovely fantasy world.

Running time: A little over two hours with a 15-minute intermission.